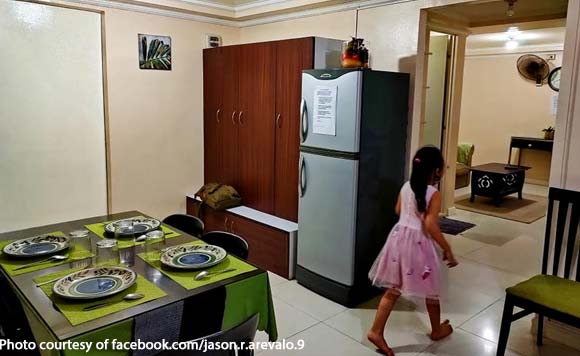 Masbate Board Member Jason Arevalo got quite a thrill when the AirBnbB place he rented in Metro Manila turned out to belong to a politiko he admires: former Bayan Muna Rep. Neri Colmenares.

In a Facebook post, Arevalo shared that he had to stay in Manila to look after his mother who is confined in a hospital.

He asked his sister to find a simple place where he could sleep, cook, and wash up and she found him a Quezon City pad that was clean, homey, and simple.

And in a nice surprise, the place turned out to be owned by Colmenares. The latter used to live there with his family.

Arevalo also almost got to meet his lodi.

Colmenares’ wife informed him that the former lawmaker knocked on his door around midnight, but the Masbate politiko was apparently dead to the world because of tiredness.

It was a missed opportunity to share a cerebral talk with Colmenares, but Arevalo was happy enough that Colmenares made the effort to reach out to him.

Who knows, their paths may cross again soon!

Had to confine Mama to a hospital here in Manila to arrest an infection in her system. Asked my sister in the States to find me some AirBnB near the hospital where Mama is at. She suggested to me some places in posh hotels and condominium buildings. Told her all I needed was a place to sleep, cook and wash up. Nothing fancy or luxurious. I have always been a Spartan: minimalist, simple, grounded. No cheapskate here but simplicity and frugality are signal to me.

Her long search ended in a place here in QC: a bit bare but clean, homey, simple. And yeah, fairly priced. And which is more. The bed and board she booked belonged to a man I respected and supported in the last elections, along with Chel Diokno and other progressive pols. The unit is owned by Atty. Neri Colmenares! And yeah he and his family used to live there!

Apart from having a peek through the simple life this former congressman had, I almost got more. Atty. Colmenares visited me last night around midnight. However, exhausted and wasted the whole day attending to Mama, I was already dead to the world when he knocked on the door. Whew, could have been a cerebral and worthwhile talk with him!

But, that barring, thank you, Atty. Colmenares, for the efforts. T’was humbling!

I always hold in high esteem people who fight for the rights of others because just so many are too busy or just couldn’t care less.

And while most get feverishly excited with photo ops or rubbing elbows with political bigwigs and celebs, I get elated with little Davids fighting what seems to be lonely battles and still persevere and continue…,” Arevalo posted.