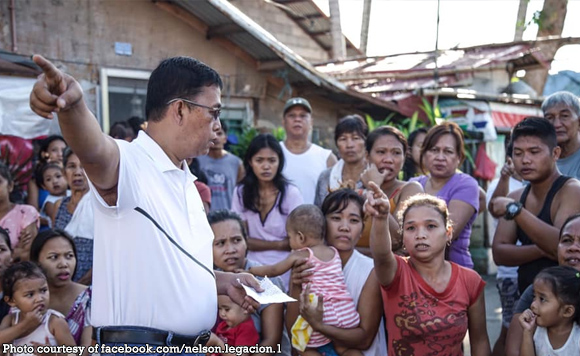 0 244
Share
Want more POLITIKO News? Get the latest newsfeed here. We publish dozens and dozens of politics-only news stories every hour. Click here to get to know more about your politiko - from trivial to crucial. it's our commitment to tell their stories. We follow your favorite POLITIKO like they are rockstars. If you are the politiko, always remember, your side is always our story. Read more. Find out more. Get the latest news here before it spreads on social media. Follow and bookmark this link. https://goo.gl/SvY8Kr

Legacion listened to the concerns and issues of the residents. This is part of the mayor’s thrust of bringing the government closer to people.

“Mayor Son met with the residents in the area to hear out and address their varied concerns particularly, their longing to own the piece of land where they are currently residing (considered as easement), the installation of street lights, restoration of fallen electric posts, and clearing of debris, among others,” said Mayor Legacion.

Meanwhile, Legacion also met with Naga City Teachers and Employees Association (NACITEA) to discuss the additional schools in the city.

“With an upcoming lineup of educational programs, as well as the ongoing construction of learning institutions within the city, Mayor Nelson Legacion met this afternoon with the Naga City Teachers and Employees Association (NACITEA) headed by its president, Monching Geronimo, to consult with them his plans, particularly on the establishment of schools,” said the city government.

Moreover, in another development the Naga City government received a financial aid from the Land Bank of the Philippines.

“Aiding in the LGU’s efforts of building a more resilient city as well as helping those affected by the recent typhoon Tisoy, Landbank donates one hundred thousand pesos (Php 100,000.00) financial assistance for Naga,” the city government said.