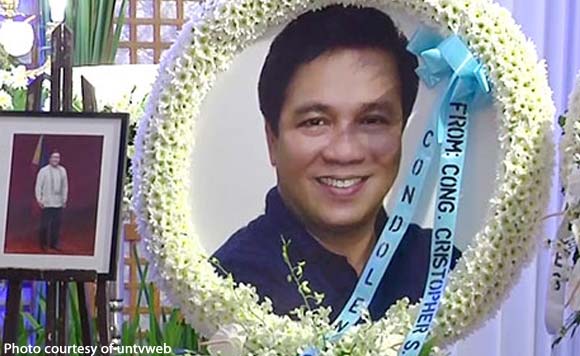 On his first death anniversary on Sunday, the late Ako Bicol (AKB) Party-list Rep. Rodel Batocabe was fondly remembered by members of his family.

“When dad was still alive, we would decorate the Christmas tree together and have a family picture,” said Justin, his eldest son, recalling how their family celebrated Christmas in previous years.

Justin and his mother Gertrudes led the commemoration of the first death anniversary of Batocabe, who was killed during a gift-giving event in a remote village here on December 22 last year.

Close friends of the Batocabe family offered a Holy Mass in various Catholic churches in this town and Legazpi City.

“Now, kulang na ang pamilya (our family is no longer complete). It’s definitely tough for us and we miss him very much but the quest for justice continues,” Justin said.

The Supreme Court (SC) has ordered the transfer of the venue of the criminal cases filed against former Daraga mayor Carlwyn Baldo over the death of Batocabe and his security escort, according to AKB Party-list Rep. Alfredo Garbin.

Garbin said his request, along with that of Justin and Gertrudes, for the transfer of venue of the cases was granted by the high court’s 2nd Division.

The SC ordered the Clerk of Court of the Legazpi City Regional Trial Court (RTC) Branch 10 to forward the records of the cases to the executive judge of the Manila RTC.

The transfer of venue, according to the petitioners, was necessary due to the alleged bias and partiality of Judge Maria Theresa San Juan-Loquillano towards Baldo. They claimed that they could not have a fair trial before the sala of Loquillano, and that they fear for the safety of their family and witnesses should the trial continue in Albay or any part of the Bicol region.

“We are thankful that the case has been transferred to Manila. No less than the Supreme Court has expressed its skepticism of obtaining justice in RTC Legazpi Branch 11,” Justin said.

The Police Criminal Investigation and Detection Group (CIDG) filed murder and multiple frustrated murder cases against Baldo for allegedly masterminding the killing of Batocabe and his security escort, and six principal suspects who either surrendered or were arrested.

Baldo was allowed to post a PHP8.72-million bail, prompting protests from Batocabe’s supporters.

The local court also subsequently dismissed the case for illegal possession of firearms and explosive against Baldo for “insufficient evidence”.

“We are disappointed at the immediate dismissal of the illegal possession case. We hope that despite this setback, the PNP (Philippine National Police) – CIDG will not give up in this particular case,” Justin said.

The House of Representatives’ Committee on Public Accounts, chaired by Anak Kalusugan Party-list Rep. Michael Defensor, has summoned former PNP chief Oscar Albayalde to shed light on the status and answer issues surrounding the disbursement of the PHP35-million bounty that was raised by President Rodrigo Duterte, the House, and the province of Albay intended for the prosecution witnesses concerning the Batocabe murder case.

Garbin said members of the public accounts committee would ask Albayalde to explain and submit an accounting on the monetary reward in exchange for the capture of the mastermind and killers of the lawmaker.

He said the PHP35-million bounty included PHP20 million from the President; PHP13 million from members of the 17th Congress; and PHP2 million from Albay’s provincial government.

“As a matter of transparency and accountability, we would ask Albayalde to submit to Congress a report where the money was used,” Garbin said. “The contributions came from the own pockets of congressmen who are close to Rodel and wanted a fast resolution of the case.”

The call for an accounting from Albayalde was in relation to the report that two of the key witnesses against Baldo recanted their earlier testimonies due to the alleged failure to receive the reward they were promised.