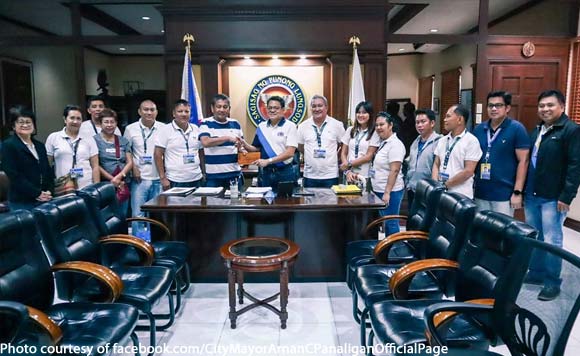 Calapan Mayor Arnan Panaligan is happy to share the programs of the city that has made it a thriving place.

Panaligan recently welcomed Passi City officials and presented to them the symbolic key to the city.

Passi wants to recreate this program since it is still using the manual system to process business permits, which is time consuming and prone to error.

Panaligan is all too happy to share Calapan’s expertise on this matter.

He noted that Passi City and Calapan City had a lot of things in common, including land area and population. They were also created a few weeks apart.

And now that Calapan is sharing its best practices with Passi, the latter could soon enjoy the progress that Calapan has achieved!

“Visitors from Passi City, Iloilo – I presented the symbolic key to the City of Calapan to the officials of Passi City headed by City Councilor Cornelio Teves who visited our city to observe and study our electronic governance system, specifically the electronic Business Registration Information System (BRIS) and electronic Business Information and Monitoring System (BIMS), both of which have been awarded as national first prize winner in the Digital Governance Awards. The Passi City Government is interested in replicating our electronic system in business registration and inspection as they are still using the time consuming and error prone manual system in their business licensing operations. Passi City and Calapan City have many things in common. Our cities were created only a week apart in 1998, March 14 and March 21, respectively. We have almost the same land area, 25,000 hectares plus and population. Our visitors from Passi City were impressed with our city commenting that Calapan City looks like a mini version of Iloilo City. Also in the photo were City Government of Calapan officials who briefed our visitors, Engr. Jojo Reyes, Mr. Dewfall Abas and Ms. Nenette Ramirez. – City Mayor Arnan C. Panaligan,” Panaligan posted.