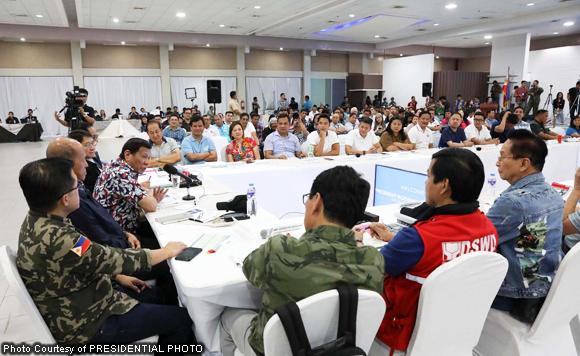 0 1,668
Share
Want more POLITIKO News? Get the latest newsfeed here. We publish dozens and dozens of politics-only news stories every hour. Click here to get to know more about your politiko - from trivial to crucial. it's our commitment to tell their stories. We follow your favorite POLITIKO like they are rockstars. If you are the politiko, always remember, your side is always our story. Read more. Find out more. Get the latest news here before it spreads on social media. Follow and bookmark this link. https://goo.gl/SvY8Kr

President Rodrigo Duterte has lauded the Albay province under the leadership of Governor Al Francis Bichara for achieving zero casualty during the onslaught of Typhoon Tisoy.

Duterte presided the post disaster assessment briefing in Legazpi City, Albay last December 6. It was attended by Governors of other Bicol provinces.

“Typhoon Tisoy’s first landfall took place at Gubat, Sorsogon at 11:30 PM of December 2, second in San Pascual in Masbate, third in Marinduque and departed the Philippine Area of Responsibility after its last landfall in Oriental Mindoro,” said the province.

“Typhoon Tisoy caused extreme devastation in Bicol region. As Usec. Ricardo Jalad said during the briefing held at the Legazpi Convention Center on December 5, Typhoon Tisoy caused a total of 1,234,460,000.00 damages to infastructure while 667,710,502.00 on agriculture,” it added

Governor Bichara has also sought the help of the President for assistance for those who were affected by the typhoon.

“I hope you (President Duterte) can help us”, said by Governor Bichara.