Joey or Chiz? Next president will come from Bicol – Duterte 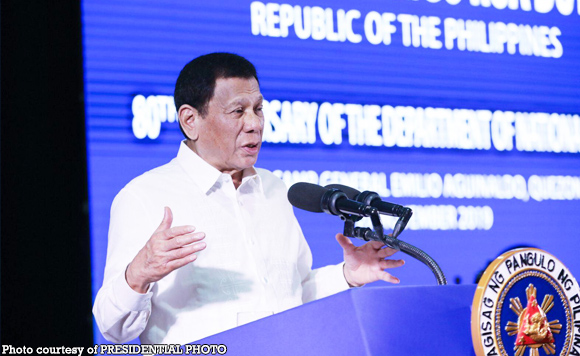 President Rodrigo Duterte on Thursday raised the possibility that his successor will come from the Bicol Region.

During the situation briefing on the effects of Typhoon Tisoy held at the Legazpi City Convention Center, Duterte broached the idea of having either Albay 2nd District Rep. Joey Salceda or Sorsogon Gov. Francis “Chiz” Escudero as the country’s next president.

“The next president will come from Bicol. You have a choice of Salceda and Chiz Escudero,” the President said.

Duterte made the statement barely a week after he announced that his daughter, Davao City Mayor Sara Duterte-Carpio, will not seek the highest public office in the country.

In February this year, Sara said she might run for president, but noted that her final decision on her possible presidential bid will be announced by January 2021.

The President has persistently maintained that he would not allow his daughter to be his successor, stressing the presidency could “destroy” her because she would be bombarded with criticisms.

Duterte, who only has less than three years in office, said on November 29 that he and his party mates from the ruling Partido Demokratiko Pilipino – Lakas ng Bayan have yet to talk about their possible candidate for the 2022 presidential derby.

He, however, made it clear that he has no plan to groom anyone to be his successor.

The President also said he has no advice for the country’s next president, as he would let his successor to act on his own in fulfilling the mandate of protecting and serving the country.

“Do it on his own. Let him find the qualities that the people are looking for,” Duterte said in the November 29 interview with CNN Philippines.

“Wala akong suggestion. This country will continue without me starting it or stopping it. Hindi naman hihinto ang mundo para sa akin. So let the other guy found out what he should be doing,” he added.