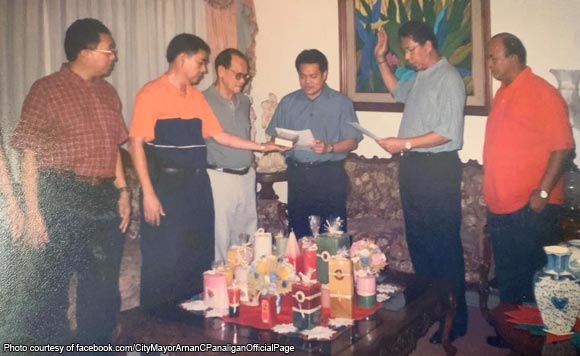 Calapan Mayor Arnan Panaligan looked back on the first time he held a gubernatorial post 15 years ago.

In a Facebook post, Panaligan said he became Oriental Mindoro Governor on December 1, 2004 after the then incumbent Governor, Bartolome Marasigan, passed away.

He took his oath before Judge Manuel Luna, who was his neighbor, and shared a photo of the event.

He said Marasigan passed away at 5 am of December 1, while he took his oath at 8 pm of the same day. This meant that technically, Oriental Mindoro had no governor for 15 hours, he noted.

From then, he held the position of governor for nearly six years, or until 2010.

After he reaches the term limit for mayor, will he seek the gubernatorial post again?

“Throwback – 15 years ago today, December 1, 2004, I became Governor of Oriental Mindoro as successor of Gov. Bartolome Marasigan who died in the early morning of that day. I took the oath of office as Governor before Judge Manuel Luna, my neighbor in our barangay. Witnessing the oath taking were, left to right, the then PNP provincial director, Board Member Romeo Infantado (holding the Bible), my father, Leandro S. Panaligan, I and Judge Luna and Board Member Ernesto Liwanag. Gov. Marasigan died at around 5:00 am of December 1 and I took the oath at around 8:00 pm. Technically therefore, the province had no Governor for about 15 hours. I served as Governor until 2010. Photo courtesy of Councilor Nino Liwanag of Bongabong, the son of Board Member Erning Liwanag,” Panaligan posted.

Thank you for your prayers! Gov. Migz Villafuerte says there…

VP Leni and Mayor Vico off to a good partnership