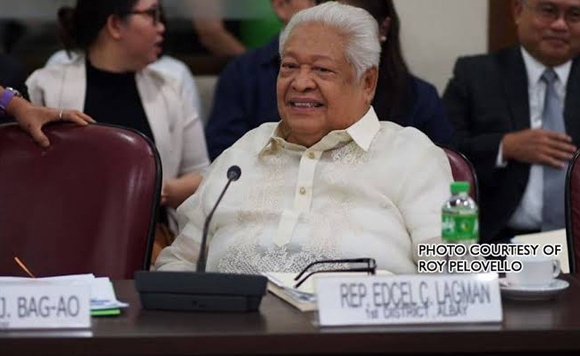 Albay Rep. Edcel Lagman was the only lawmaker who voted “no” to House Bill 5477 institutionalizing Malasakit Centers nationwide, which was passed on third reading by the House of Representatives on Monday.

The House voted 185-1-7, with the only negative vote coming from Lagman of the opposition Liberal Party.

“No amount of legislation ‘institutionalizing’ the Malasakit Centers will cleanse them of their partisan origin which helped propel the senatorial candidacy of the Malasakit poster boy,” he said, alluding to Sen. Bong Go, who popularized the centers during his senatorial campaign.

Lagman accused Go of pressuring the House to adopt and approve an identical version of the senator’s bill.

“The admitted pressure from this senator bastardized the committee system and the import of Plenary deliberations of a co-equal Chamber as it conscripted unanimity despite the pendency of 18 separate bills filed by individual Representatives which have differing provisions from the Senate bill,” he said.

Lagman said the Malasakit Centers only “duplicate what is presently being performed by PhilHealth and the Department of Health.”

“For lack of appropriate appropriation language, the Malasakit bill conceals the fact that this additional bureaucratic layer would need added allocations in the amount of almost P300 million annually for the establishment and operations of Malasakit Centers,” he added.

He also slammed the fact that the House-approved version was “a carbon copy of the Senate-approved bill and was crafted and introduced in Plenary without the privity and approval of the sponsoring health committee.”

This is “consequent to the importuning of the concerned Senator for the House of Representatives to approve a version completely identical to his bill in the Senate in order to foreclose a bicameral conference committee.”