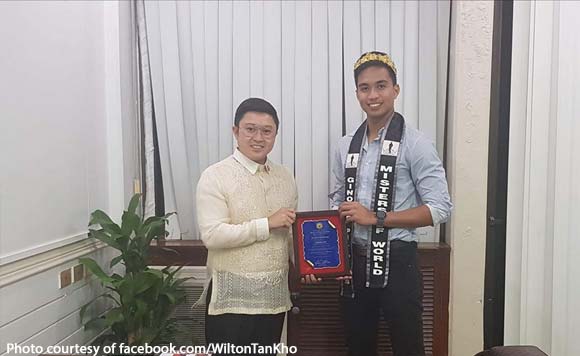 Masbate Rep. Tonton Kho is happy to support Lorenzo Isip, a winner of the Ginoong Pilipinas who will represent the country in Misters of the World 2019.

Isip, who had been crowned Mister Tourism Cebu 2019 and Ginoong Masbate 2019, visited Kho in his office recently.

In a Facebook post, Kho called on all Masbatenos to unite behind Isip and to support him in the forthcoming pageant Misters of the World Pageant.

Masbatenos should show the world the beauty of its people!

He was crowned Mister Tourism Cebu 2019, Ginoong Masbate 2019 and was one of the Ginoong Pilipinas 2019 winners with the title “Misters of the World 2019” last October 27, 2019. He will be representing the Philippines in the upcoming edition of Misters of the World. The specific date and venue of the coronation night is yet to be announced.

Let’s unite as one Masbateños in supporting him in his upcoming pageant and future pageants. This is our very own Masbateño pride just like Ms. Bea Rose Santiago! 😊

Thank you for visiting us here in the House of Representatives office!” Kho posted.