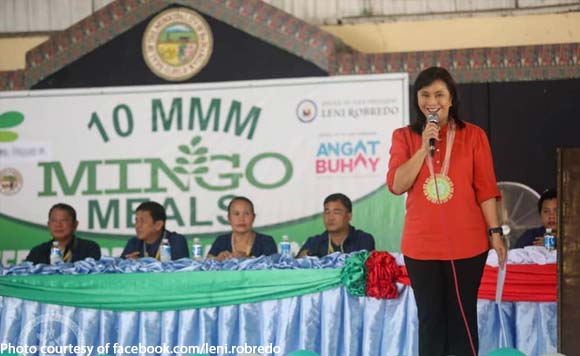 Amid the controversy generated by her remarks on the President’s war on drugs, Vice President Leni Robredo enjoyed a very busy day in the Visayas.

Robredo talked about her day in a Facebook post, saying she woke up very early to fly to Iloilo.

From Iloilo City, she had lunch in the car while going to Concepcion in the eastern part

Then she went north to President Roxas in Capiz, where she launched feeding programs for children. She also had an Ahon Laylayan Assembly.

She spoke before a huge crowd in the dark in President Roxas because the power conked out, but thankfully, the crowd remained in high spirits, she said.

But despite her packed schedule, her tiring day was also a productive one, and for this, she was grateful.

Being busy still trumps being idle!

“Super long day just coming to a close. Woke up very early to catch our early morning flight to Iloilo.

Went from Badiangan, Iloilo in the west to Assumption College in Iloilo City. Took lunch inside the car and travelled 2.5 hours to Concepcion, Iloilo in the east. Then travelled north to President Roxas, Capiz then further west to Roxas City. We launched two feeding programs for malnourished children, had an Ahon Laylayan Assembly, and several meet-and-greets in between. Electricity went off while we were in Concepcion. I addressed a huge crowd in the dark (well, there was a solar lampost near which was the only source of light) in President Roxas. But the people were still in very high spirits. Dinner was when we reached the hotel almost 10:00 tonight.

Tomorrow, we have 5 more events here. Long, tiring, but very productive day. Couldn’t get any better than this.

Thank you to our Angat Buhay Partners-Negros Volunteers for Change, Jesus del Rosario Foundation, Inc, and EMCOR for making all our projects in Iloilo possible. Thank you also to Sen Frank Drilon, who joined us in Badiangan and Concepcion. Thank you to BM Jason Gonzales and other Provincial Officials. Thank you to the Mayors and other local officials who hosted and assisted us.

Log in to Facebook to start sharing and connecting with your friends, family and people you know.

Pictures here are just for the first 2 events. Will post the rest tomorrow,” Robredo posted.