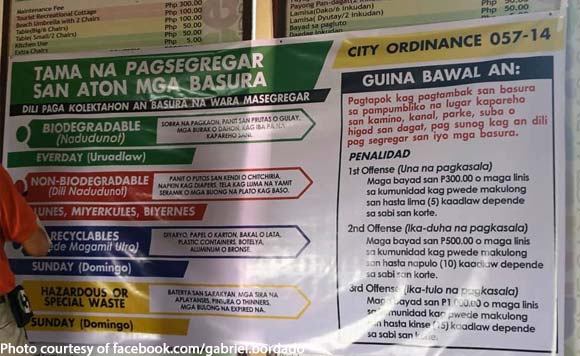 Masbate City Mayor Rowena Tuason is hoping that her constituents will get into the habit of segregating their trash.

Tuason is taking steps to instill this practice in each and every resident, and has met with barangay leaders, eco aides, street sweepers, and members of the Barangay Ecological and Solid Waste Management Committee to discuss the implementation of the no segregation, no collection policy.

In a Facebook post, she said strategies were discussed and these include identification of additional pick up points.

The local personnel would also issue reminders to households that their trash would not be collected if these are not properly segregated.

They should know this because specific days would also be set to pick up biodegrable, recyclable, and special waste.

With strict enforcement, hopefully segregation would be second-nature to city residents!

“Learning to segregate our waste is what we ask from the residents of the city of Masbate.

At the moment is the meeting of Punong Barangays, Eco Aide, Street Sweepers and members of Barangay Ecological and Solid Waste Management Committee to discuss on how we can effectively implement the NO SEGREGATION, NO COLLECTION POLICY.

Strategies are formulated by each Poblacion brgys including the identification of additional pick up points.

Please mind your waste to have a clean and green environment.