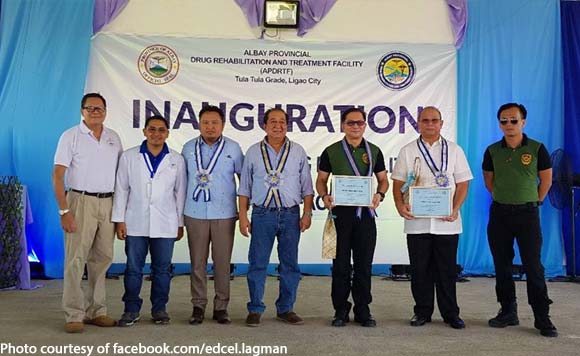 0 349
Share
Want more POLITIKO News? Get the latest newsfeed here. We publish dozens and dozens of politics-only news stories every hour. Click here to get to know more about your politiko - from trivial to crucial. it's our commitment to tell their stories. We follow your favorite POLITIKO like they are rockstars. If you are the politiko, always remember, your side is always our story. Read more. Find out more. Get the latest news here before it spreads on social media. Follow and bookmark this link. https://goo.gl/SvY8Kr

Governor Al Francis Bichara inaugurated recently the Albay Provincial Drug Rehabilitation and Treatment Center which is deemed to be the first center with complete facilities.

“Albay province now has its own Drug Rehabilitation and Reformation Facility. It has psychiatrists, psychologists, nurses and social workers. It has a medical clinic as well as dormitories for both girls and boys and a multi-purpose building,” Lagman said.

“All those manning these facilities will implement treatment programs tailor-fit for its clients who are mostly minors who use drugs, push drugs and/or have pending cases in court,” he added.

The Vice Governor said that their goal now is to bring back Albayano children in conflict with the law back to the mainstream of society.

“There are many inspiring stories on minors who once lost their way but took full advantage of the second chances afforded them. Many eventually became successful and productive citizens. Surely no one is beyond redemption,” Lagman said.

:Also happy to have one of the more trustworthy and capable people in government who truly are committed in fighting the drug menace as our guests of honor.”