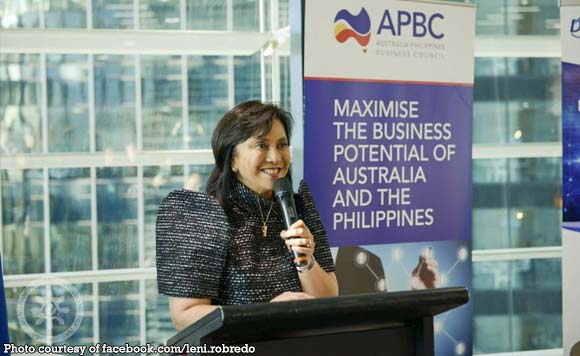 She responded with cold, hard facts, saying she got a reminder from followers of her vow not to let unfair accusations go unanswered.

In her post, she explained that her trip was covered by an authority to travel by the Office of the President.

It stated that the trip was private and was at no cost to the government.

Her reason for traveling to Australia was to speak at the Australia Philippines Business Council, an invitation given several months ago. Before the event, she also met with business leaders and heads of Australian companies who had invested in the Philippines.

While in Australia, she also stood as godmother at the wedding of two Filipinos and which was officiated by several Filipino priests.

Before leaving, she also joined fellow Bicolanas at a mass in Pernith, an event attended by Australian Government officials.

She said the event was for the last week of October, was rescheduled when they learned she was flying in for the business council earlier in the month.

“Been tagged several times and have been receiving messages alerting me of this hate post. When I saw who posted this, I initially shrugged this off since the ones who own that account have made it their business to pull my family down and make people hate us. This started more than a decade ago when Jesse was still Mayor of Naga. Never namin pinatulan kasi sa ganito naman, yung lugi, yung hater, hindi yung object/s of hate😊

But 2 followers have been sending a series of messages reminding me that I promised sometime ago that I will no longer allow unfair accusations to go unanswered.

1. Am attaching my Authority to Travel issued by the Office of the President which clearly indicates that the trip was private in nature and AT NO COST TO THE GOVT. ( Bka gusto iresearch kung nag charge na ako ng pamasahe at gastos ng foreign travel sa gobyerno😇);

2. It is true that the Main Purpose of my visit was my Keynote Address before the Australia Philippines Business Council. It was an invitation from many months ago. In fact, APBC President Ed Alcordo, personally visited me at the office to relay the invitation;

3. Before the main event, I had a closed door meeting with CEOs and other representatives of Australian Companies who already have investments in the Philippines and are still thinking of expanding and other companies who are in the process of studying whether or not to put some investments in the Philippines. Among the companies represented were RAMCAR, DTSI Group, Dell Australia and New Zealand, Austal Limited, Telstra, AIMS Financial Group, Lane Moving & Storage, ACCRU Felsers Sydney, Produxts & Portfolio, AGL, CSG Limited, Bendigo and Adelaide Bank, Warczak Group, Macquarie Bank, URBIS, Vliew, Salesforce, Hunter Careers, Bankwest, EFIC, Wengeo, World Vision, Alcatel Bell Shanghai, NBN Co and others. If interested with the details of what transpired, you can always email APBC;

3. I was a godmother at a wedding of two Filipinos in the afternoon of October 11. The wedding was officiated by several priests who are all Filipinos. The Papal Nuncio to Australia, Tito Yllana, who is also a Filipino, was one of those who officiated;

4. Yesterday, October 12, before I left for the airport for my flight back to Manila, I joined my Bicolano kababayans for a Holy Mass and a gathering in Pernith, Australia. The event was attended by Australian Government Officials led by the New South Wales Premier (see previous post). Initially, their invitation was for the last week of October. But when I told them of the Australia Philipines Business Council invitation for October 9, they willingly rescheduled their event to October 12.

5. Other details and pictures of my trip are posted on my official facebook page.