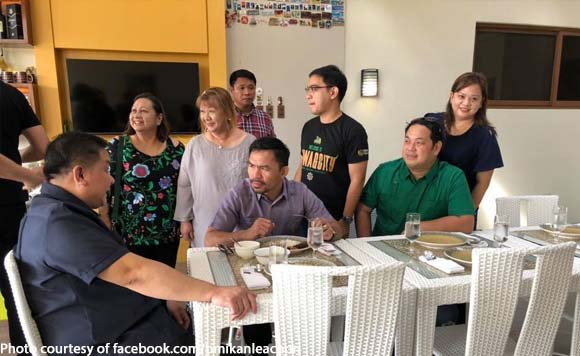 0 340
Share
Want more POLITIKO News? Get the latest newsfeed here. We publish dozens and dozens of politics-only news stories every hour. Click here to get to know more about your politiko - from trivial to crucial. it's our commitment to tell their stories. We follow your favorite POLITIKO like they are rockstars. If you are the politiko, always remember, your side is always our story. Read more. Find out more. Get the latest news here before it spreads on social media. Follow and bookmark this link. https://goo.gl/SvY8Kr

It’s not everyday that one gets to have breakfast with a boxing superstar who is also a Senator, and Oriental Mindoro Board Member Mikan Leachon made the most of the opportunity.

Leachon also said Pacquiao was one of the best and one of humblest Senators, which is why it was an honor to be with him.

He also joked that he report a referee’s bad calls at a basketball game to Pacquiao.

If there’s anybody who would understand gripes about referees, it’s surely a sports man like Pacquiao!

“Blessed to have breakfast with one of the best ever and most humble, Senator Manny Pacquiao. Isang malaking karangalan po! Mabuhay kayo! 🇵🇭🔥

All will get relief goods, Naujan Mayor Mark Marcos assures…