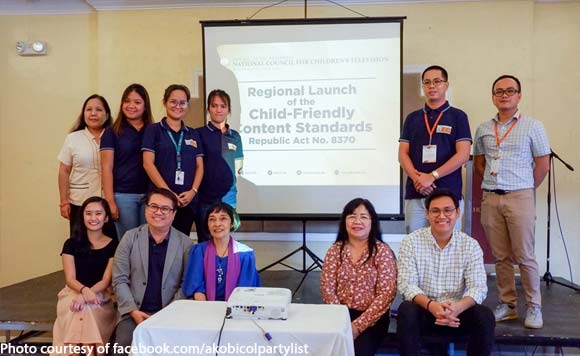 The Ako Bicol partylist expressed support to the the implementation of child-friendly content standards over media platforms.

The partylist supported the stricter implementation of RA No. 8370 otherwise known as the “Children’s Television Act of 1997.

“The activity discussed about the significance of the strict implementation of the R.A . No. 8370 otherwise known as the “Children’s Television Act of 1997″ and the research on the impacts of media consumption, its motivations as well as parental mediation methods that affect the young population,” said the partylist.

“Ako Bicol supports the implementation of it’s guidelines which promotes positive development of children in the creation of media content and programming,” it added.

Present during the event were various representatives from the media, academe, local government units, and other entities both from public and private sectors of the society.

“This is the third time Ako Bicol has supported the NCCT’s yearly advocacy of ensuring that child-friendly content is given 15% of a network’s total airtime,” it said.

“It may also be noted that the late Congressman Rodel M. Batocabe is a strong supporter of this noble initiative.”