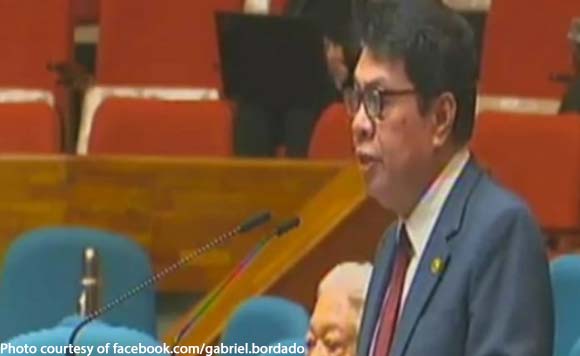 Bordado, in a Facebook, shared the contents of his recent privilege speech about the electoral protest of losing vice presidential candidate Bongbong Marcos.

According to him, fake news is being circulated on social media claiming that Marcos was about to be proclaimed.

This is all part of a bid to sway public opinion and was just initiated by trolls using fabricated claims and graphics, he said.

But the logical have pointed out that Robredo won fair and square, and was rightly proclaimed by Congress three years ago.

He called on people to keep standing and fighting for the truth, especially since the credibility of the electoral process and political system is at stake.

It’s an important fight that we must be vigilant about!

“PART OF MY PRIVILEGE SPEECH ON VP LENI, MR. MARCOS, AND THE PET: In the past few days, stories about proclaiming “the Real Vice President” were making the rounds on social media–clearly a desperate attempt initiated by trolls and panicky supporters of a losing vice presidential candidate, perhaps in a bid to sway public opinion on the incoming Presidential Electoral Tribunal (PET) decision. They even came up with fabricated and rehashed graphics indicating the supposed victory of their candidate.

The more logical voices online, however, were quick to point out what is true and obvious–that in this very hall, more than three years ago, Congress proclaimed the duly elected Vice President of the Republic of the Philippines–Her Excellency, MARIA LEONOR “LENI” GERONA ROBREDO.

Mr. Speaker, at a time when facts are easily twisted and lies are sensationalized, I urge everyone to stand up for the truth. As Chief Justice Lucas Bersamin puts it, “we should be careful of what we do here because the credibility of our processes as well as the political system is at stake.” And this can only be done by respecting the legitimate will of the people,” Bordado posted.

Thank you for your prayers! Gov. Migz Villafuerte says there…

VP Leni and Mayor Vico off to a good partnership