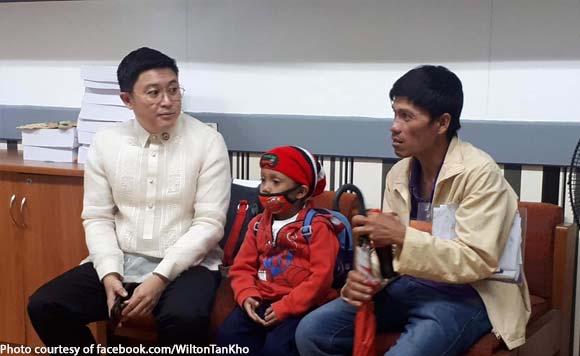 Kho was referring to Mark John Francisco, who came knocking on his door with his father Solomon for help for his medical condition.

Mark John is afflicted with Portal Hypertension and Portal Vein Thromboses and needs to undergo a medical procedure, which his family cannot afford to pay for.

Kho provided cash assistance for the boy, since his predecessor did not allocate funds for medical assistance, he said in a Facebook post. He was also able to get a guarantee letter from Masbate Rep. Olga Kho and P10,000 from the Department of Social Welfare and Development for Mark John.

Moreover, he said Masbatenos in his district would surely get P22 million worth of hospitalization or medical funds next year.

What struck Kho during his meeting with Mark John was that the boy remained positive and brave despite his condition.

He also commended Solomon for doing all he could for his son. As a father himself, he could relate, he added.

It was one inspiring meeting!

Earlier today, Mr. Francisco and Mark John paid me a visit at the congress. Unfortunately, after some several months of tests and monitoring under the care and treatment of Philippine Children’s Medical Center, Mark John was diagnosed with Portal Hypertension and Portal Vein Thromboses and the attending physician advised Mr. Francisco to undergo Mark John with Esphagogastroduodenoscopy with Rubber Band Ligation (EGD with RBL). Due to financial challenges, Mr. Francisco seek and tried to request medical assistance from our good office for his son.

Aside from keeping my commitment to prioritize the health of our fellow Masbateños, I am also a father so I felt what Mr. Solomon is feeling right now. Infact, as parents, we all do. We can’t bear to look at our children suffer. They are our soft spot.

Thank you to our generous Congresswoman from the 2nd District of Masbate, Dra. Olga Kho for the guarantee letters since the former representative from the 3rd District never allocated funds for medical assistance BUT don’t worry, this post is an assurance that our fellow Masbateños will be getting ₱22million worth of hospitalization and/or medical assistance funds next year.

Mr. Francisco got cash assistance from our office for their medical expenses instead. Also, we have assisted in granting them a total worth of ₱10,000 from the Department of Social Welfare and Development (DSWD).

During my brief meeting with the Franciscos, Mark John still managed to stay positive and showed bravery despite his medical conditions. That’s the spirit!!

I commend Mr. Solomon Francisco for showing to us the unconditional love parents do to their children. Dahil dyan, you are one of the DADs OF THE YEAR! 🙂

I will do everything in my power as your Congressman to assist every Masbateños’ need and give everything you guys deserve,” Kho posted.