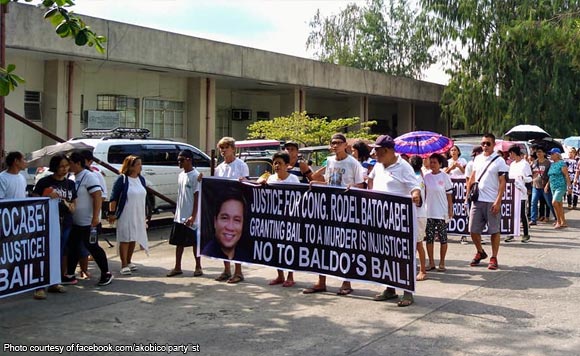 Supporters and friends of slain Ako Bicol Rep. Rodel Batocabe gathered last Friday for a prayer rally amid the release of the alleged mastermind behind his killing.

“Hundreds of Bicolanos rallied on Friday, September 6, 2019, in Legazpi, Albay to show support for the family of the late Ako-Bicol Party-list Representative Rodel M. Batocabe’s fight for justice,” said the partylist.

Baldo was the primary accused for the killing of Rep. Batocabe and his aide SPO4 Orlando Diaz.

Batocabe and Diaz were ambushed last December 2018 during a gift giving activity in Burgos, Daraga, Albay.

“Supporters, friends and members of different social groups which were helped by Batocabe joined in peaceful protest at the Legazpi City Regional Trial Court to call for justice for Batocabe and Diaz’s deaths and the entire Philippine Justice system,” Ako Bicol said.

Batocabe was supposed to run against Baldo as Daraga Mayor.