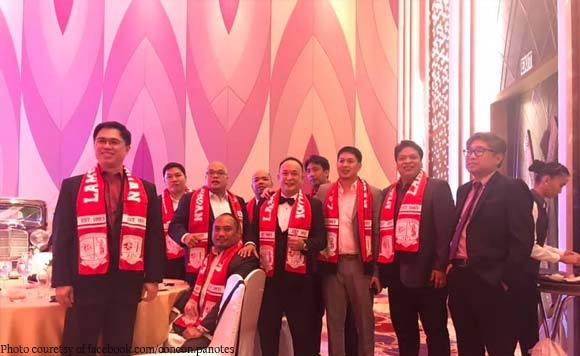 0 901
Share
Want more POLITIKO News? Get the latest newsfeed here. We publish dozens and dozens of politics-only news stories every hour. Click here to get to know more about your politiko - from trivial to crucial. it's our commitment to tell their stories. We follow your favorite POLITIKO like they are rockstars. If you are the politiko, always remember, your side is always our story. Read more. Find out more. Get the latest news here before it spreads on social media. Follow and bookmark this link. https://goo.gl/SvY8Kr

It looks like Camarines Norte Board Member Concon Panotes has made ties to last a lifetime with his brothers from the Lamda Rho Beta Fraternity and sisters from the Labda Rho Sigma Sorority.

In a Facebook post, Panotes shared that the joined the celebration of the groups’ anniversary at Okada Manila recently.

According to him, he feels honored to belong to Lambda Rho Beta, which he said was the most exalted fraternity of the San Beda College of Law.

It was founded by former Rep. and immigration commissioner Bojie Cabochan, he said.

For Panotes, it is the best fraternity!

“Celebrating the Lambda Rho Beta Fraternity and Lambda Rho Sigma Sorority’s Anniversary at Okada Manila. Honored to be a member of this Most Exalted Fraternity of the San Beda College of Law founded by former Congressman and Immigration Commissioner Bojie Cabochan. For the Lambda Rho Beta, The Best!!,” Panotes posted.

Palawan Board Member Ryan Maminta spends bday in the…

Marinduque Vice Gov. Romulo Bacorro’s bday wish is about his…