Being bright has its perks, says Tabaco Councilor Gio Bongao 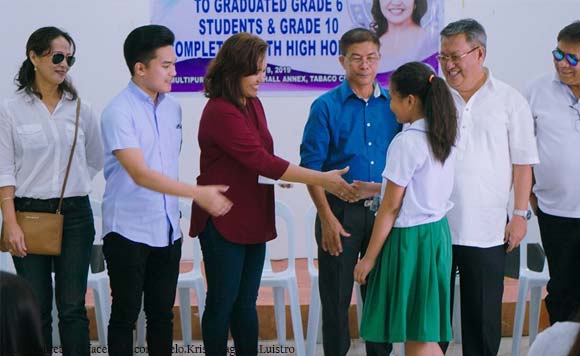 0 418
Share
Want more POLITIKO News? Get the latest newsfeed here. We publish dozens and dozens of politics-only news stories every hour. Click here to get to know more about your politiko - from trivial to crucial. it's our commitment to tell their stories. We follow your favorite POLITIKO like they are rockstars. If you are the politiko, always remember, your side is always our story. Read more. Find out more. Get the latest news here before it spreads on social media. Follow and bookmark this link. https://goo.gl/SvY8Kr

Tabaco Councilor Gio Bongao was happy to distribute cash incentives to students who have completed grade six and grade ten with flying colors.

In a Facebook post, Bongao said the incentives were not limited to sports medallists, and are now also given to diligent students from Tabaco who were able to get high grades.

According to him, the provision of incentives is part of a holistic approach, as the local government wants to encourage Tabaco students to develop both their minds and their bodies.

Tabaco wants well-rounded students who can excel in many areas!

“Distribution of cash incentives amounting to Php 469,000.00 to graduated grade six pupils and grade ten completers of the different public elementary and secondary schools of Tabaco City. Aside from the incentives to sports medallists, we are also giving incentives to diligent Tabaqueño students with high honor to encourage others to follow such achievements. This is one of the holistic approaches of the City Government of Tabaco to develop both physically fit and intellectually developed young individuals.

For those who have not yet claimed their incentive, please find your name on the list below and proceed to the office of Hon. Gio Bongao at the 3rd floor, Office of the Sangguniang Panlungsod, City Hall Annex, Tabaco City,” Bongao posted.