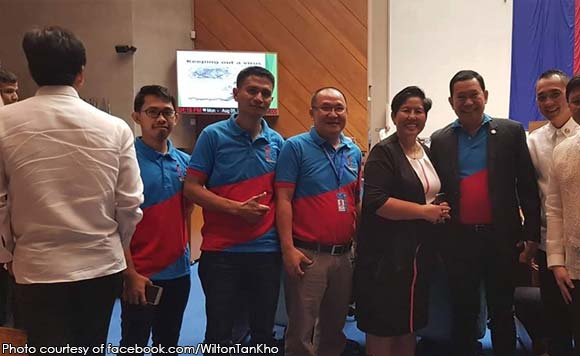 Masbate Rep. Tonton Kho is going directly to officials in his bid to electrify towns in his province.

In a Facebook post, Kho said he met with National Electrification Administration chief Edgardo Masongsong and NMT-MASELCO’s Abdulmalik Lao Bacaraman to discuss the frequent power interruptions in the province.

They also discussed ways to bring electricity to non-electrified barangays.

And the talks had been productive, the politiko said.

According to him, they have come up with solutions to Maselco’s problems, with the help of the NEA.

He also got a hand from Philreca Partylist Rep. Presley de Jesus, who would help bring power to barangays left in the dark.

Looking for solutions is better than assigning blame!

“Another productive discussion with the National Electrification Administration (NEA) administrator, Sir Edgardo Masongsong and NMT-MASELCO Abdulmalik Lao Bacaraman to address the solution to our frequent brownouts, solve the Pamatec problems and electrification of non-electrified baranggays of Masbate.

We will do everything in our power para ma push through, kay isad ini sa makabulig pag asenso san aton lugar.

We will keep you posted! 😉

PS wag na po tayo magsisihan kung sino may problema.. the important thing is we are now considering several solutions for this decade long problem of the Province of Masbate,” Kho posted.