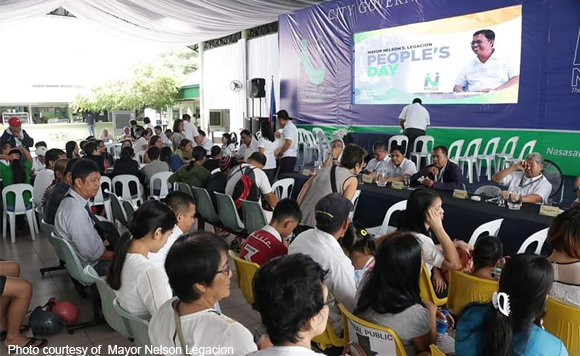 Naga City Mayor Nelson Legacion has started yesterday the People’s Day sa People’s Hall in a bid to make his administration even more closer to his constituents.

“PEOPLE’S DAY sa People’s Hall every 1st and 3rd Monday of the month started yesterday morning as a one-stop-shop measure to cater to and ensure that the needs of the city’s constituents are immediately responded to,” Mayor Legacion said.

Aside from Legacion, other key department heads of the City Hall were likewise present to address the needs of Nagueños.

“Mayor Son, together with heads of offices involve in social services, held their office at the open halls of the Naga City People’s Hall today– marking the official start of the People’s Day at City Hall– a one-stop-shop of City Government services made readily available to clients,” said the City Government.

Meanwhile, Legacion expressed his gratitude to all the heads of departments and offices who were in attendance during the first People’s Day.

According to the city government, the People’s Day will be held every 1st and 3rd Mondays every month. It aims to respond to the needs of even larger number of clients and provide easier access of the people to the local government’s services.