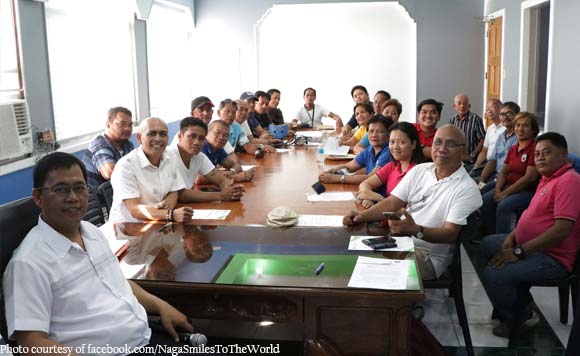 Naga City Mayor Nelson Legacion recently met with the barangay captains to discuss his vision for the city for his first term in office.

Legacion also listened to the issues facing the captains regarding peace and order, among others.

“Mayor Son meets with Punong Barangays of Naga and shared with them his administration’s vision and policy directions, particularly on new tourism projects and programs that they will be undertaking in the city,” the city government said.

“He also took the opportunity to have the Punong Barangays share issues on peace and order and environment, among others, to which they are concerned within their respective barangays– promising the duly take of the city government in resolving the problems,” it added.

Meanwhile, in a separate development, the City Government of Naga awarded Certificates of Appreciation to all schools, agencies, barangay councils, and volunteers for participating and supporting the School Belt Emergency Drill Exercise.

The drill was conducted last June 28 that cover mass earthquake and fire drill exercises involving 10 public and private schools situated along Penafrancia Avenue, Liboton, and Jacob streets in the city.

Those who were awarded certificate of appreciation include:

“The drill aims to test and strengthen the resiliency of the academic institutions in the city,” the Naga City government said.