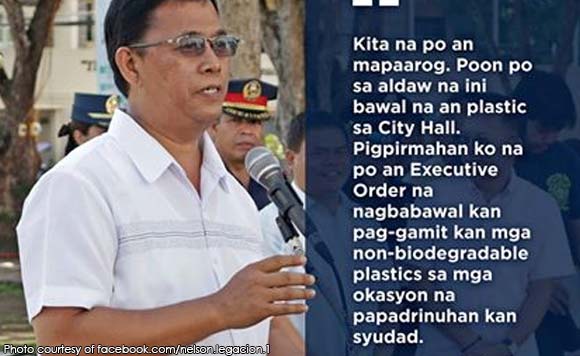 Life in plastic is not fantastic for Naga City Mayor Nelson Legacion.

Legacion did not wait for a plastic ban ordinance to be passed before taking steps to prevent the proliferation of this material in his city.

In a Facebook post, Legacion said he had issued an executive order that would ban the use of plastics in all city hall sponsored events or programs.

This would underscore that he is serious in caring for the environment.

There is a worldwide campaign to ban the use of single use plastics that tend to clog waterways and landfills, and the mayor does not intend to fall behind.

Whether they’re people or things, let’s all say no plastic!

“LEADING BY EXAMPLE: While hoping for the immediate passage of a Plastic Ban Ordinance, I have already issued EO 2019-026 banning plastics in all city hall sponsored/led events to show our seriousness in our efforts to protect our environment,” Legacion posted.

Continue Reading
Bawal ang plasticFacebook postNaga CityNaga Mayor Nelson Legacionworldwide campaign to ban the use of single use plastics
0
Share
Politiko would love to hear your views on this...
Trending News
More Stories