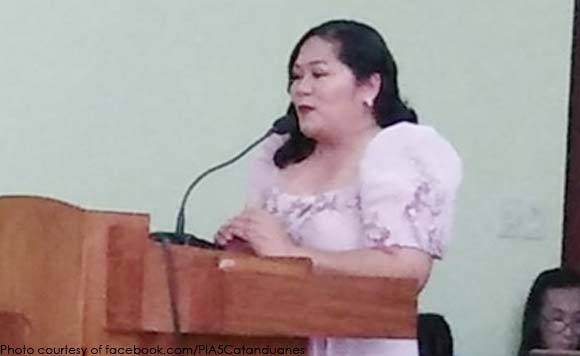 0 605
Share
Want more POLITIKO News? Get the latest newsfeed here. We publish dozens and dozens of politics-only news stories every hour. Click here to get to know more about your politiko - from trivial to crucial. it's our commitment to tell their stories. We follow your favorite POLITIKO like they are rockstars. If you are the politiko, always remember, your side is always our story. Read more. Find out more. Get the latest news here before it spreads on social media. Follow and bookmark this link. https://goo.gl/SvY8Kr

Acting Catanduanes Governor Shirley Abundo said that she will zero in on the developments of local health sector during her stint as the temporary chief executive of the provincial government.

Abundo, the reelected Vice Governor of the province, said that she wants to focus on projects deemed to “benefit more people.”

The acting governor also emphasized the need of fund resources as well as the demand for fast transactions for the medical center. She said that resolving these issues would grant her the contentment she hope for as Acting Governor.