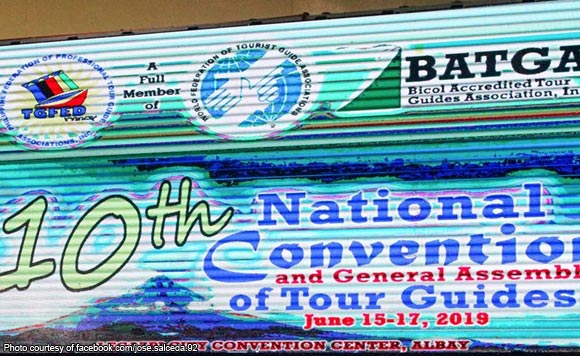 The Province of Albay served as the host for this year’s 10th National Tour Guides Convention and General Assembly.

Representatives of various travel and tour agencies from different regions all over the country met in Albay to hold the convention with the theme “Filipino Tour Guide, A decade of intensity and resiliency.”

“Grouped into delegations, each delegation is composed of Tourist Guides and travel agency owners wearing their different regional and local costumes and attires as part of the program and the festivities,” the province said.

The Provincial Government of Albay through the Provincial Tourism, Culture and the Arts Office headed by Ms. Dorothy F. Colle welcomed the participants.

“As she eagerly aims to fully boost the tourism in the province, Ms. Colle expressed her outmost gratitude to the organization in choosing Albay as the venue to celebrate the prestigious annual program,” said the province.

Bichara shared in his speech how he aspired to make Albay a perfect destination from the time he was elected as Governor in 1995.

“Before we jumpstart, we need to fix first our backyard,” he said as he encouraged the organization to work with the PGA in line with the Tourism Industry of Albay.

“Currently, tourism has been his continuous flagship program along with the creation of Albay Farmers Bounty Village, a one-stop-shop spot for Albay farmers as a boost for the agriculture sector,” said the province.