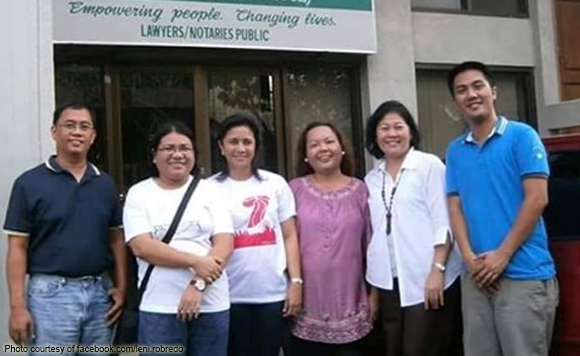 Before she joined politics, Vice President Leni Robredo was part of a non-government group that provides legal services for the downtrodden.

Robredo reminisced about her days at the Sentro ng Alternatibong Lingap Panlegal in Naga when a 2010 photo of her with her colleagues surfaced on Facebook.

During her years at Saligan, she was inspired by the lawyers who dedicated their lives to helping the poor.

But she and her colleagues in the photo she saw have moved on to bigger things since then.

She said Nelson Legacion is the new Naga Mayor, Hazel Lavitoria is executive director of Saligan, Kakao Bag-ao is the incoming governor of Dinagat Island, Mila Arroyo has been reelected Naga City Councilor, and David Abogado is branch coordinator of Saligan-Bicol.

Back in 2009, they had no clue they would end up where they did now, she said.

But one thing is certain: they have come a long way!

“When I opened my facebook this morning, I saw this blurred picture of me with former Saligan colleagues taken outside the SALIGAN-Bicol office in Naga.

I was a SALIGAN Lawyer for many years before I entered politics and was inspired by many lawyers who selflessly dedicated their lives to help the poor. In 2010 when this picture was taken, we were still clueless that we will all be where we are now 9 years after.

That’s me third from left 😊 With me are

Atty Nelson Legacion who is now Mayor-elect of Naga.

Atty Hazel Lavitoria who is now Executive Director of Saligan.

Atty Mila Raquid Arroyo who is an incumbent Naga City Councilor and who has been reelected into a fresh term.