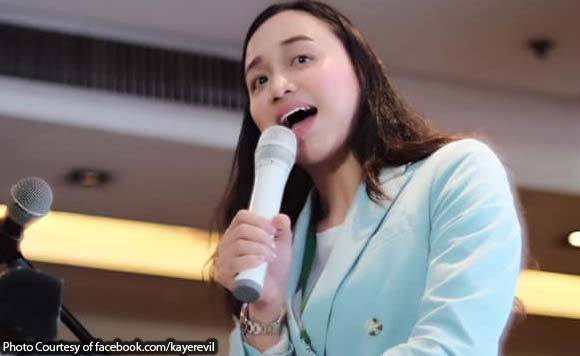 Vice Governor Kaye Revil has already accepted her defeat in the congressional race in Masbate.

Revil also expressed her gratitude to more than 32,000 Masbateños who voted for her as Masbate 2nd district representative.

“Dear Masbate, you have spoken. I respect your choice & your convictions. You know how I’ve worked hard as your VG & our team gave our best efforts & all too for this campaigns, so it’s quite painful to get this kind of results,” Revil said.

“That you need not even see a candidate campaigning or have a solid platform for you to vote the person is downright disheartening, alarming & what a dangerous precedent for the next generation,” she noted.

Revil noted that the votes she gathered were “shamefully low,” which is just 30% of the registered voters in her district.

“Our province isn’t ready for the platform we envisioned, the advocacies we hoped to push forth & the kind of leadership we have. No offense to those who won, but I know that you know I didn’t buy votes,” she said.

Revil also urged those who believe in her not to lose hope because “maybe some day, things will change.”

“Maybe people will be more empowered in many ways that money received to vote won’t be primordial,” noted Revil.

Above all, Revil thanked God for this journey.

“I know He has the best plans. I am excited to move on to that. But for sure, I need time to heal,” she said.

“Masbate, I will always love you. I pray & look forward to that time you are already freed from the bondage of poverty that caused you to decide the way you just did. And still, I’m a proud Masbateña, but unfortunately, you lost your own,” she said.