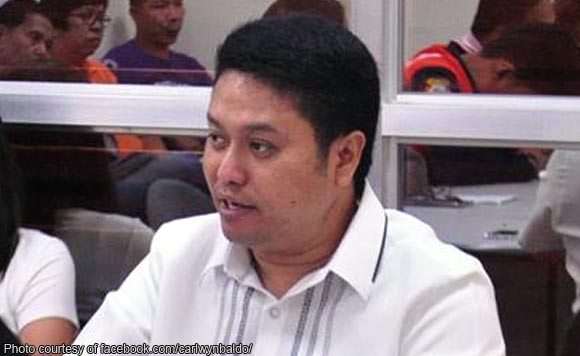 0 1,229
Share
Want more POLITIKO News? Get the latest newsfeed here. We publish dozens and dozens of politics-only news stories every hour. Click here to get to know more about your politiko - from trivial to crucial. it's our commitment to tell their stories. We follow your favorite POLITIKO like they are rockstars. If you are the politiko, always remember, your side is always our story. Read more. Find out more. Get the latest news here before it spreads on social media. Follow and bookmark this link. https://goo.gl/SvY8Kr

Calubaquib said the judge ordered Baldo to be detained at the Legazpi City jail pending his arraignment set on May 30.

Baldo had gone on hiding since Monday after Loquillano issued an arrest warrant for double murder and six counts of attempted murder over the killing of Ako Bicol Party-list Rep. Rodel Batocabe and his police escort at a gift giving event in Barangay Burgos, an upland village in Daraga, on December 22 last year.

Loquillano was tasked to hear two separate cases against Baldo, the first case for illegal possession of firearms and ammunition, and the second for double murder and attempted murder together with six others.

As this developed, Vice Mayor Victor Perete is waiting for an order from the Department of the Interior and Local Government (DILG) for him to assume as acting town mayor following Baldo’s surrender.

Citing the rule of succession pursuant to the Local Government Code, DILG-5 director, Anthony Nurda, said Perete, being the vice mayor, would have to take over the post to avoid any “vacuum or hiatus” in the town’s local government operations.

Aside from Baldo and Perete, running for the town’s mayoral post is Batocabe’s widow Gertrudes.

The Bureau of Jail Management and Penology (BJMP) assured there would be no special treatment for Baldo.

“After the booking process, he will be put in the jail’s reception and diagnostic center of the Legazpi City Jail Annex. This is the area where newly-committed PDLs (persons deprived of liberty) undergo orientation of the rules and regulations of the facility. Mayor Baldo will be treated as an ordinary PDL. (The) Legazpi City Jail has 324 PDLs, as of this time,” BJMP spokesperson, Chief Insp. Xavier Solda, said in a statement. (With reports from Christopher Lloyd Caliwan/PNA)

Capitol brings info drive on splitting Palawan into 3 in…

Palawan Comelec gears up for plebescite on May 11