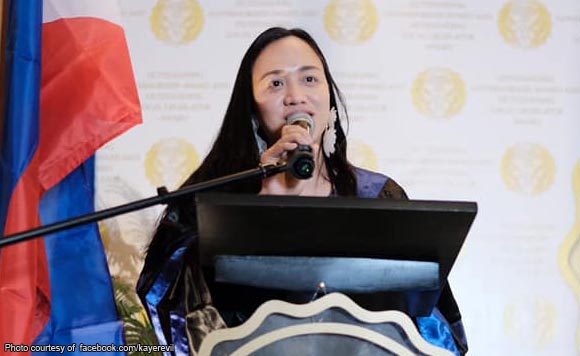 Masbate Vice Governor Kaye Revil has been awarded anew as an Outstanding Local Legislator by the Superbrands.

The incumbent Vice Governor said that she is savoring the award, which could be her last for the same position now that she’s running for Congress.

“I’m glad to be here again. This is my second time to be awarded by Superbrands as an Outstanding Local Legislator. This probably too would be my last in that category as a Vice Governor,” Revil said.

“You know I didn’t run for VG anymore, so I savor this sweet recognition that came in very timely as I’m about to end this term,” she added.

Revil said that the award was the product of her sweat and tears for both joys and sorrows.

“That, as I took quite seriously my mandate as a public servant. Many times I had to sacrifice my personal comfort & family’s convenience, just to deliver beyond what is expected of me,” she said.

Revil was also thankful for her family and loved ones for supporting her, which caused them “troubles and pains” brought about by politics.

“Then again we consistently, passionately pushed on & gratefully we’ve achieved. Whether all that toil & hard work can gain me a seat in Congress to represent the people whose welfare I truly have dedicatedly worked on, is yet to be seen,” she said.

“Yes, the chance is 50-50. But I do think that #Masbate deserves to be represented by a true #Masbateña, a VERY GOOD true Masbateña. Then again as I vowed to not buy votes this coming election, God’s will be done,” she noted.

IATF Mimaropa places Calapan City under MECQ from Aug. 13 to…