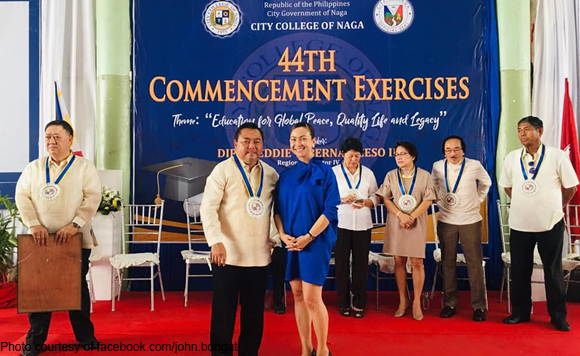 It’s graduation season not just for students, but also for politikos who have reached the end of their term limits.

Naga Mayor John Bongat is one of them, and he received a Plaque of Graduation from the City College of Naga for his efforts during the school’s commencement exercises.

Bongat shared a photo of the plaque on Facebook and thanked CCN for the appreciative words, as the school said he led an “inspirational kind of life to the people of Naga City” and gave “the best example of real and truthful civil servant.”

He was also touched by the school’s words that he would leave “unfathomable footprints in the hearts of everyone.”

Bongat may be leaving his post, but his legacy would not be forgotten!

“SINCE IT’S HAPPY GRADUATION HERE and THERE, I was greeted just that, with a “Plaque of Graduation” from our City College of Naga (CCN) family, on the occasion of their 44th Commencement Exercises this afternoon, considering that I, myself, am graduating as your Mayor come June 30. Happy graduation to the Class of 2019! Thanks CCN for the appreciative words, for believing that I’ve lived such an “inspirational kind of life to the people of Naga City” and have given “the best example of real and truthful civil servant.” But more than that, you also say that my “graduation as Mayor of Naga City, after nine years of honest and dedicated service, leaves the unfathomable footprints in the hearts of everyone.” I really hope that I’ve been inspiring enough! #ValedictorySeriesMJB.49,” Bongat posted.