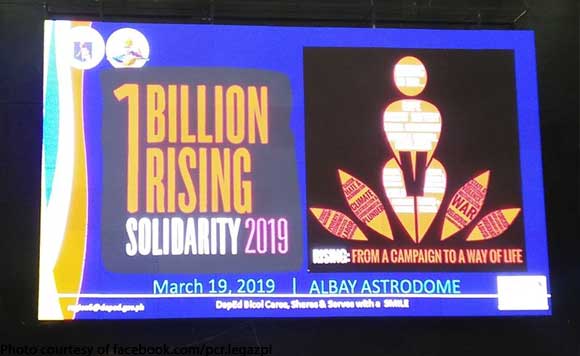 The Department of Education in Bicol Region has hosted the One Billion Rising Solidarity 2019 at the Albay Astrodome as part of the celebration of Women’s Month.

“One Billion Rising is the biggest mass action to end violence against women including the cisgender, transgender, and those who hold fluid identities that are subject to gender-based violence in human history,” the province said.

“The campaign began as a call to action based on the staggering statistic that 1 in 3 women on the planet will be beaten or raped during her lifetime,” it added.

Several activities were held such as the Solidarity walk and Zumba early in the morning at the Legazpi Blvd to Albay Astrodome.

“Highlight of the event is the OBR Dance Ritual performed by selected Teachers of SDO Naga City who were actively joined by the participants. The dances express joy of the community and celebrate the fact that they have not been defeated by this violence,” said the province.

“They rise to show that they are determined to create a new kind of consciousness – one where violence will be resisted until it is unthinkable,” it added.