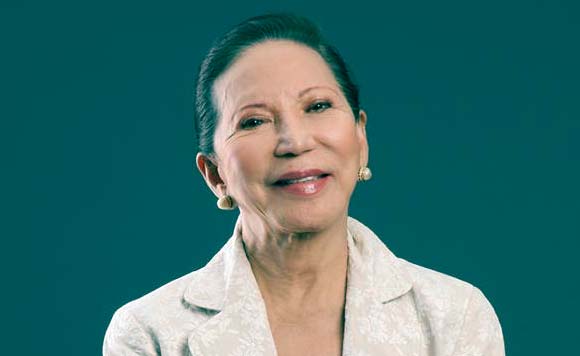 The provincial government said that Reyes “peacefully joined her Creator and her husband, former Immigration Commisioner Edmundo Sr. on January 7, 2019.”

She was serving her third and last term as Governor of Marinduque.

“She will be greatly missed by her children and in-laws Violet, Bernadette and Garnik Azarnia, Marichu and Louie Vega, Gina and Dodo Mandanas, and Edmund and Camille Sison, her grandchildren, Armen, Simon, Billie, Mocky and Michelle Manalastas, Enzo, Gian, Paolo, Edmundito, Marianna Carmen, Sandro, Mandy, and her great grandchildren Luis Ernesto Edmundo, Henri and Carmen Astrid,” the the Capitol.

“She also joins her siblings, Oscar, Ramon, Imelda Ongsiako Cojuangco, Edmundo, and Myriam Ongsiako Montelibano as they find peace with God,” it added.

Accoriding to the provincial government, her remains will be brought in Marinduque on Thursday, January 10.

She will be laid to rest on Friday, January 11 after the celebration of a Funeral Mass at 9:00 am at the Sanctuario de San Antonio Church, Forbes Park, Makati City.

“Nanay Carmencita will be always remembered for her dedicated and untiring service to the people of Marinduque. In lieu of flowers, the family would appreciate donations to the Monastery of St. Clare, Bantad, Boac, Marinduque,” said the provincial government.

Reyes started her career in politics as a delegate in the 1971 Constitutional Convention.

She served as governor anew starting 2010.