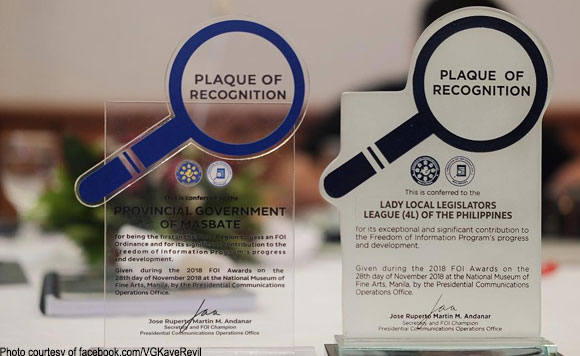 The Provincial Government of Masbate received an award for championing freedom of information.

Masbate Vice Governor Kaye Revil, who spearheaded the passage of the FOI ordinance in Masbate, personally received the recognition.

The award was bestowed by the Presidential Communications Operations Office (PCOO) and the Department of Budget and Management (DBM).

“Because to have a transparent & accountable government is a legacy for the future generation,” the Vice Governor said.

Reevil also bagged recognition for pushing for transparency in governance to the Lady Local Legislators’ League of the Philippines, a group which she leads.

“Your ever passionate & active mother of Masbate Atty. Kaye Revil is here now at the National Museum as a National Awardee of the Presidential Communications Operations Office & the Department of Budget & Management for championing the Freedom of Information Ordinance in the Province of Masbate & for advocating the same to the Lady Local Legislators’ League of the Philippines,” she added.

Revil said that nine local government units passed the FOI Ordinance in the country, and Masbate is the first province to do so in Bicol Region.

“Thank you PCOO & DBM for this recognition. Grateful most especially to Asec. Kris Ablan & his FOI team for guiding us through,” she said.

“Usec. Epimaco Densing III of DILG & Sec. Martin Andanar glad to meet you again. Sec. Benjamin Diokno thank you for the inspiration. Looking forward to your guidance as we operationalize the same in our Province. God is good,” she added.