Achieve! Legazpi City is now in the Seal of Good Local Governance Hall of Fam 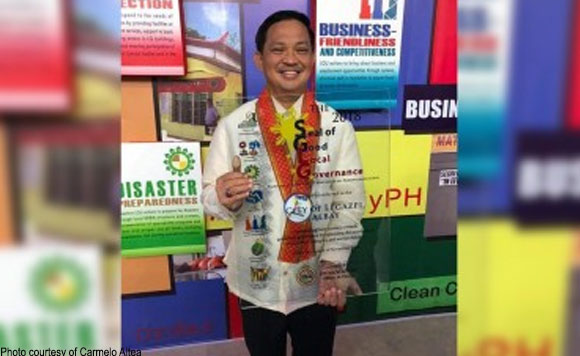 Fresh from being cited by the Department of the Interior and Local Government (DILG) as a Hall of Famer in the prestigious Seal of Good Local Governance (SGLG) award, the city government here has vowed to implement more programs and projects for the continued development and progress of Legazpi.

For three consecutive years or from 2016 to 2018, the city administration has been a recipient of the yearly SGLG award.

Interior department Officer-in-Charge, Secretary Eduardo Año, handed over the plaque of appreciation and a cheque amounting to PHP5.1 million to Legazpi Mayor Noel E. Rosal at the Manila Hotel on Wednesday.

Rosal said his administration received the award after the city passed the criteria given by the DILG in the areas of financial administration, social protection, and peace and order, as well as for its implementation of programs on disaster preparedness, tourism promotion, and culture and the arts.

He assured that his administration will continue its good governance for the benefit of the Legazpeños.

“This prestigious award would give us more encouragement, dedication and drive to carry out investment-friendly projects that would continue to boost the economic standing of our city as this recognition would give the business community a feeling of confidence to invest and put up more business establishments in this city while financial institutions would offer financial grant to sustain economic development projects that the city administration is pushing for,” Rosal said.http://bicol.politics.com.ph/wp-admin/edit.php?post_type=videos

He added that the SGLG award received by Legazpi is a luminous proof of the city’s good governance that has resulted in continuous progress and development of the locality, and also improved investor confidence as shown by the increase in the number of establishments operating in the city.

Rosal said the performance challenge fund of PHP5.1 million received by Legazpi could be used to purchase at least five vehicles, two of which can be designated to the City Health office to improve health care services to people in the barangays.

The two others could be deployed to the General Services Office while the remaining vehicle can be used in monitoring important projects in the villages, he added.

The SGLG award is the highest recognition given by the DILG to an LGU for having shown good governance and effective delivery of social services, as well as for practicing transparency, accountability and responsiveness in management. (PNA)