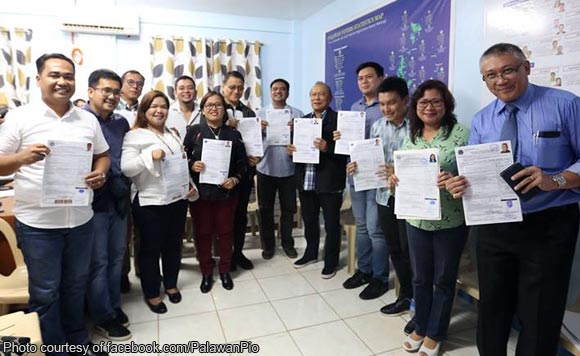 Governor Alvarez, together with the full slate of Partidong Pagbabago ng Palawan (PPP), filed their respective Certificates of Candidacy (COCs) with the COMELEC provincial office last on Monday, October 15.

Alvarez is running together with incumbent Vice Governor Victorino Dennis M. Socrates. The two are still considered “as the team to beat” in the coming May 2019 polls.

Four other aspirants are challenging the incumbency of Alvarez, while two others are seeking to unseat Socrates.

According to the province, Governor Alvarez and Vice Governor Socrates enjoy “strong support from the twenty three municipalities because of their pro-active style of governance.”

“The present administration of Governor Alvarez is primarily responsible for crafting the five-point executive development agenda of the provincial government summed up in the acronym I-HELP that stands for Infrastructure, Health, Education, Livelihood and Protection of the environment,” said the province.

“Capitalizing on the no-nonsense implementation of the programs, projects and activities under I-HELP, the present provincial government leadership is poised to gain the solid support of the local citizenry in the upcoming polls,” it added.

Alvarez and Socrates are serving their second term in public office that started in June 2013.