Legazpi named as most business-friendly city by PCCI 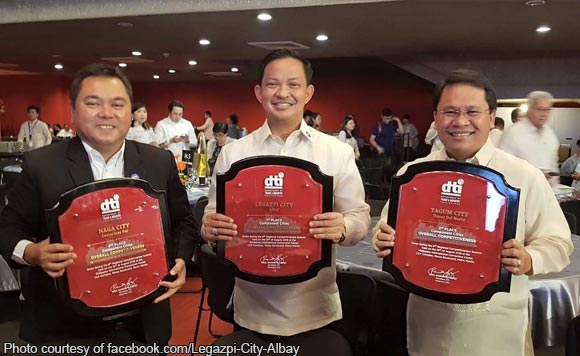 LEGAZPI CITY — Another feather was added to this city’s cap as it earned recognition for being the Most Business-Friendly City in the country from the Philippine Chamber of Commerce and Industry (PCCI), under the Component City Category.

Rosal, in an interview on Friday, said the business sector is one of the accelerators of economic growth that hugely contributed to the city’s coffers and gave more employment opportunities to the locals.

“It’s really an honor for us to receive the most business friendly city award because this kind of recognition symbolizes Legazpi as the new investment hub in the country today that will surely continue to improve the investor’s confidence to put up more business establishments in the city,” he said.

The city mayor said his administration is aggressively implementing the Anti-Red Tape Act of 2007 to expedite government transactions through the formulation of the Citizen’s Charter.

Rosal further said the city’s Business Permit and Licensing Office has established a public assistance and complaint desk as well as one-stop-shop and courtesy lanes for pregnant women, senior citizens and persons with disabilities in order to speed up the application and renewal of business permits.

“The members of the city council have already enacted an Investment and Incentive code in order to promote economic growth and sustainable development through the effective and efficient services strengthened by the active participation of all the stakeholders within a safe environment,” he also said.

The main objective of the code is to harmonize the national and local investment policies as well as to establish organizational structures to guide the efficient and effective implementation of this code and also to set the guidelines, procedures and standards for identifying priority investment areas, he explained.

It also promotes the development of Micro, Small and Medium Enterprises (MSME), he added.

Rosal said for the past 10 years, almost P30 billion has been invested in Legazpi by different giant business firms including the SM Super Malls and Ayala Group of Companies. (PNA)