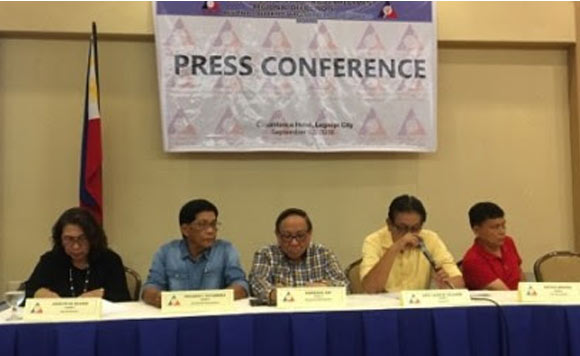 0 715
Share
Want more POLITIKO News? Get the latest newsfeed here. We publish dozens and dozens of politics-only news stories every hour. Click here to get to know more about your politiko - from trivial to crucial. it's our commitment to tell their stories. We follow your favorite POLITIKO like they are rockstars. If you are the politiko, always remember, your side is always our story. Read more. Find out more. Get the latest news here before it spreads on social media. Follow and bookmark this link. https://goo.gl/SvY8Kr

The Department of Labor And Employment (DOLE) together with the Regional Tripartite Wages and Productivity Board (RTWPB) announced on Friday the approved new minimum wage rate for private sector workers in the Bicol region.

In a press briefing at Casa Blanca Hotel here, RTWPB chairman and DOLE Regional Director Alvin Villamor said the minimum wage earners in Bicol will receive an increase ranging from P20 to P30 in their daily salary.

“The increase will be given in two tranches: P15 for all establishments regardless of the number of workers upon effectivity 15 days after September 6 (September 21), following publication in a newspaper of general circulation in the Bicol which will be on September 21, and the second tranch increase of P5 for those employing 10 workers and above and P15 for those employing 1 to 9 workers on May 1, 2019,” Villamor said.

Villamor explained that in determining the amount of the wage increase, the board considered the interest of the workers, the general capacity of the business establishments to pay, and the prevailing socio-economic conditions of the region.

The board, he added, also agreed to adjust the minimum wage rate in Bicol to help workers cope with the rising cost of living without impairing the viability of business.

“The adjustment of the minimum wage rate is one of the measures of the government to provide workers with immediate relief from high prices of basic goods and services,” Villamor said.

He added that the increase in the minimum wage was the result of a series of consultations and public hearing conducted by the board and consensus between and among the labor and management representatives.

Under the new wage order, the wage rate per day shall apply to all minimum wage earners in the private sector regardless of their position, designation or status of employment and irrespective of the method by which they are paid.

The order, however, will not take effect on “kasambahays” or domestic workers covered by the Batas Kasambahay, persons in the personal service of another and workers of duly registered Barangay Micro-Business Enterprises (BMBEs).

Villamor encouraged establishments in the wholesale and retail trade and construction industry to come up with the productivity-based pay schemes that will allow higher performance/productivity of the enterprise and income among workers. (PNA)