Binukbok! Nearly 200K sacks of rice rotting away while prices sour in Albay 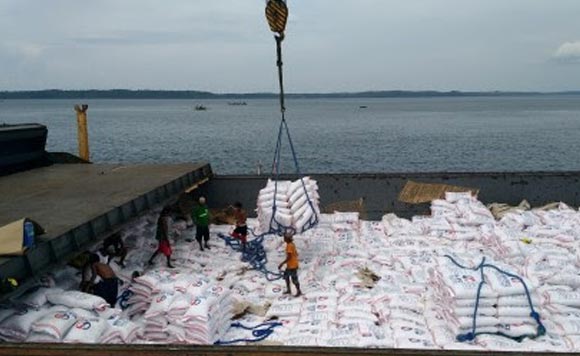 0 1,144
Share
Want more POLITIKO News? Get the latest newsfeed here. We publish dozens and dozens of politics-only news stories every hour. Click here to get to know more about your politiko - from trivial to crucial. it's our commitment to tell their stories. We follow your favorite POLITIKO like they are rockstars. If you are the politiko, always remember, your side is always our story. Read more. Find out more. Get the latest news here before it spreads on social media. Follow and bookmark this link. https://goo.gl/SvY8Kr

The National Food Authority (NFA)-Bicol is currently fumigating 186,000 bags of rice from Thailand that are still loaded on a cargo ship docked at the Tabaco Port, and which were found to have bugs locally known as “bukbok”. (Photo courtesy of NFA Albay)

LEGAZPI CITY — The National Food Authority (NFA) in Bicol bared on Wednesday that 186,000 bags of rice from Thailand still on board a cargo ship in Tabaco City are currently undergoing fumigation procedure after bugs called “bukbok” were discovered in them, a top official of NFA-Albay said.

He noted that the said volume of rice forms part of the total 200,000 bags that recently arrived in Albay from Thailand.

The pests were observed after they were able to unload 14,000 sacks from the cargo ship, Sabaybay said.

“We have to temporarily stop the unloading after discovering that insects were crawling on top of piles of rice sacks inside the cargo vessel,” he said.

“We are hopeful that the 186,000 bags of imported rice from Thailand on board a cargo vessel docked off Tabaco Port which were earlier discovered to have ‘kulisap or bokbok’ will be unloaded on the first week of September,” he added.

The cargo ship from Thailand arrived last August 7 but because of unfavorable weather condition, the unloading only started last week, lasting only for two days until pests were seen crawling on some bags of rice.

The prices of commercial rice in the market range from P39-P40 per kilo for regular milled and P42-P43 pesos for the well-milled.

Because of limited stocks in the NFA warehouses, they are trying to stretch the available stocks by giving only 20 bags per week per retailer, Sabaybay said.

“We also established stationery outlets in selected areas especially in villages with most of numbers of indigent families in the province of Albay that are called ‘tagpuan’ selling P27 of rice and allocating 50 bags every day,” he said.

Albay is only allocated 36,000 bags of rice for August.

Sabaybay is hoping that the prices of commercial rice would go down by September. (PNA)