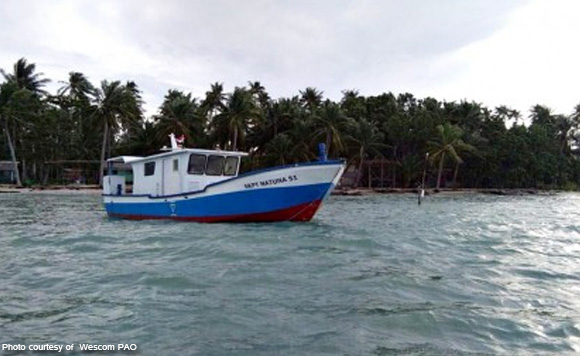 Authorities found an abandoned Indonesian-marked vessel near the shoreline of Barangay Melville in the southern Palawan town of Balabac.

It was reportedly seen drifting towards the shoreline of Melville by LMS personnel, who conducted a board and search operation with Melville village officials but found no crew in large vessel.

The vessel, with red, blue, and white colors, had a last global positioning system (GPS) reading of being on Natuna Islands in the southern part of the South China Sea where Indonesia’s exclusive economic zone (EEZ) slightly intersects with China.

Information gathered and received from a certain Commander Marlon Roa, border crossing officer based in Manado, Indonesia, showed that M/L Skpt Natuna 51 has been reported missing from Natuna Islands since July 11 this year.

Recognizing its critical security implication, the Wescom said it immediately “undertook necessary actions in coordination with the Philippine Coast Guard, the Philippine National Police Maritime Group, and the provincial government.”

It added that a joint team was immediately deployed in Melville, Balabac, and its littoral areas to conduct patrols and possible search and rescue.

The statement quoted Lt. Gen. Rozzano Briguez, commander of the Wescom, as saying that it might have been detached from where it was anchored in the islands group in Indonesia.

“The Indonesian vessel was detached from its mooring in Natuna, Indonesia, on a bad weather at night and drifted away,” Briguez said.

Information gathered also stated that the Natuna District Fisheries Department reported that there was a Banfuan Natuna 51 Skpt ship that went missing from Serasan Natuna due to bad weather.

It was reported to have been carried away from the ship’s moorings at night and was never found despite search operations. It was reported missing in July.

“We have received a police letter expressly for the report of the loss of the ship from the recipient cooperative in Natuna’s appeal,” he said.

The vessel was safely towed by two Small Unit Riverine Crafts of the 3rd Marine Brigade. Coordination with the proper government agencies has been made for its disposition and subsequent turnover. (PNA)