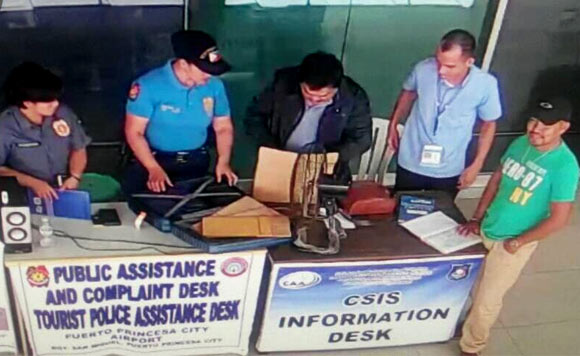 0 1,054
Share
Want more POLITIKO News? Get the latest newsfeed here. We publish dozens and dozens of politics-only news stories every hour. Click here to get to know more about your politiko - from trivial to crucial. it's our commitment to tell their stories. We follow your favorite POLITIKO like they are rockstars. If you are the politiko, always remember, your side is always our story. Read more. Find out more. Get the latest news here before it spreads on social media. Follow and bookmark this link. https://goo.gl/SvY8Kr

At about 8 a.m. on July 31, Jovani Yumen noticed a blue luggage beside a flower box at the arrival area of the airport.

After the K9 inspection yielded a negative result, tourist police examined the contents of the luggage, which contained a black jacket, a wallet with identification cards belonging to a certain Danilo Dequito, and an envelope containing 15 bundles of PHP100,000 totaling P1.5 million.

More than an hour later, Dequito went to the arrival area looking for his luggage. Upon presenting proof of identification, he claimed his luggage and examined its contents. Dequito counted his money and found everything intact and complete.

Transportation Secretary Arthur Tugade commended the airport employees for their honesty and professionalism and for following aviation security and police procedures.

“Even small acts of honesty and just by simply following the proper procedures are important in showing the integrity of our offices,” Tugade said.

“Salute to CAAP and the employees of Puerto Princesa International Airport. They set the bar high, and this should be the norm for all of us public servants,” he added.