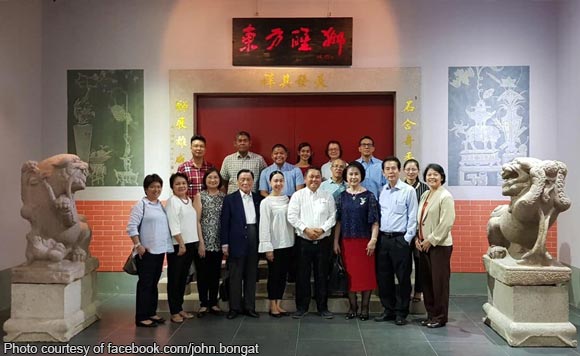 0 568
Share
Want more POLITIKO News? Get the latest newsfeed here. We publish dozens and dozens of politics-only news stories every hour. Click here to get to know more about your politiko - from trivial to crucial. it's our commitment to tell their stories. We follow your favorite POLITIKO like they are rockstars. If you are the politiko, always remember, your side is always our story. Read more. Find out more. Get the latest news here before it spreads on social media. Follow and bookmark this link. https://goo.gl/SvY8Kr

Mayor Bongat arrived yesterday in the country and shared that the 3-day official trip was sponsored upon the invitation of Naga’s sister city, Shi Shi, which ranked 16th in China in terms of GDP.

The two local governments have been sister cities for almost two decades already, whose relationship has strengthened and has created “cooperative projects and programs through time.”

“Shi Shi, China’s lion city, is hometown of the ancestors of many successful, present generation Filipino-Chinese, including our brother Chinoys in Naga, who have played a major role in the country and Naga’s economic development,” the mayor said.

“The officials of the Shi Shi Townmate Association of the Philippines, headed by chairman emeritus Antonio Tan and President Fernando Co, was a success,” added Bongat.

He also said that Shi Shi agreed to send experts in various sports to train the athletes of Naga.

“Shi Shi government has agreed in principle to send their experts in table tennis, badminton and gymnastics to help our young, local athletes become world class competitors, and to provide some technical assistance in the establishment of our own city museum!,” said Bongat.

The Naga City extended their gratitude to the officials of the Shi Shi Townmate Association of the Philippines, headed by chairman emeritus Antonio Tan and President Fernando Co, for hosting the Naga City delegates.