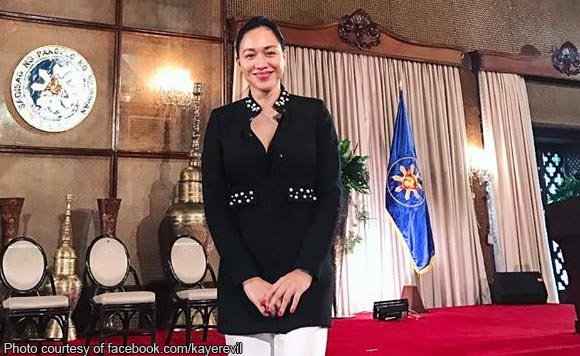 0 1,936
Share
Want more POLITIKO News? Get the latest newsfeed here. We publish dozens and dozens of politics-only news stories every hour. Click here to get to know more about your politiko - from trivial to crucial. it's our commitment to tell their stories. We follow your favorite POLITIKO like they are rockstars. If you are the politiko, always remember, your side is always our story. Read more. Find out more. Get the latest news here before it spreads on social media. Follow and bookmark this link. https://goo.gl/SvY8Kr

Most politikos dream of serving the highest position in the land, and Masbate Vice Gov. Kaye Revil is no exception.

In a Facebook post, Revil noted that many people have been telling her to run for Senator, and she is grateful for their support.

She got more candid and said she even dreams of becoming President and becoming Filipinos’ leader.

But she is grounded enough to think that becoming President is a difficult dream to reach given how elections are in the country. Even running for a provincial post is not easy because polls tend to be about money instead of competence, she said.

She wants it to stop, and hopes something can be done about this during this administration.

In the meantime, all Filipinos who remain hopeful about the Philippines should pursue their mission and work for the country’s progress, she said.

Who knows? Things might still change and we could very well be congratulating President Kaye Revil in the future!

“Some people say I can be a Senator, ahaha thank you, but you know honestly, I even dream to be President ? & lead the Filipino people in saying with conviction that we are proud of the Philippines & of being Filipino. ?? Totoo naman po, Ka-ye natin ibangon ang Pilipinas. May K tayo, pagtulungan nating i-Revil ang ganda ng ating bayan at husay ng Pilipino sa mundo! ☺️ Ay naku, oh di ba may slogan na ako. Hahaha. ?Suntok sa buwan, ambisyosa masyado, impossible with the system of elections in this country, I know. ? Even running for office in my Province makes me think twice if I still want to or can. ?Because hard truth is even if you exert all the best & very good most passionate efforts ever ⭐️, money rules & it sucks that way. I hate it like that. ?In the recently concluded barangay & SK elections, it is open knowledge how rotten the system is- with candidates spending a lot & padrinos & padrinas helping them through. The vicious cycle of greed & corruption continues. When will it ever stop? Hopefully this administration & generation can really do something. Because truly, the people in general, not just the leaders must change. Meanwhile, those of us whether in the public or private sector, who still have even the slightest glimmer of hope & sparkle of light within us ought to put our acts together, pursue our vision & continue the mission for this country’s progress, peace & sustainability. With God’s graces, nothing is impossible. ☺️ ❤️ ” she posted.

What an angel! Sablayan Vice Mayor Bong Marquez thanks…