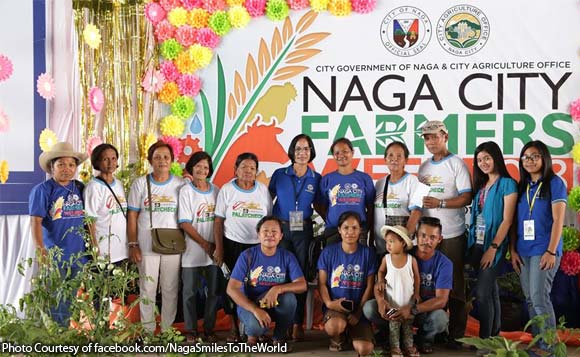 0 714
Share
Want more POLITIKO News? Get the latest newsfeed here. We publish dozens and dozens of politics-only news stories every hour. Click here to get to know more about your politiko - from trivial to crucial. it's our commitment to tell their stories. We follow your favorite POLITIKO like they are rockstars. If you are the politiko, always remember, your side is always our story. Read more. Find out more. Get the latest news here before it spreads on social media. Follow and bookmark this link. https://goo.gl/SvY8Kr

Noting the “crucial role” the farmers play in the society, the City Agriculture Office (CAgO) has opened the Naga City Farmer’s Week 2018.

The event, which aimed at giving honor to the local farmers, kicked off with a parade participated by 10 agricultural barangays in the city in their creative costumes and props.

“A ribbon-cutting ceremony officially opened the 3-day Agri-Fair at the City Hall Grounds where each of the 10 participating barangays constructed their respective bahay-kubo and displayed their own, local produce consists of fruits, vegetables and other organic crops and products as part of the Agri-Fair,” the city government said.

“To help improve farming methods in the city, a book launching of an agricultural guide by Ernesto Asence III, an agricultural technologist, was conducted as part of the celebration,” it added.

The farmers also enjoyed games prepared by the CAgO as part of the celebration.

“The celebration concluded with the awarding ceremony of the best decorated booth coming from the participating agricultural barangays in the Agri- Fair,” said the City.

Capitol brings info drive on splitting Palawan into 3 in…

Palawan Comelec gears up for plebescite on May 11