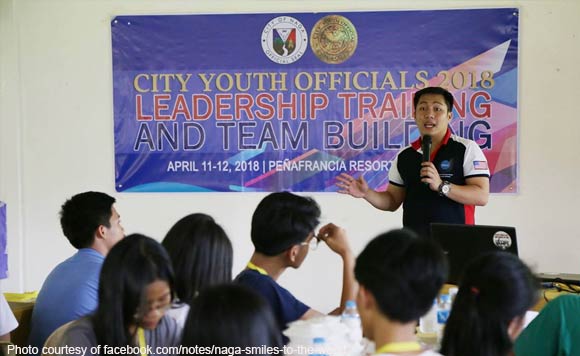 The City Government of Naga has organized a leadership development program and team building for the top 48 City Youth Officials (CYO) 2018.

The said training was initiated by the Naga City Committee on Youth and Sports Development, headed by Councilor Ray-An Cydrick Rentoy.

The program was was conducted for two days, which started on April 11 until April 12 at the Peñafrancia Resort, Carolina, Naga City,

“One of the main objectives of the activity is for the 2018 CYOs to be more united and to have a wider knowledge on how to be an effective leader,” the city government said.

Angelica Agonoy, the current City Youth Mayor, said that the activity seeks to show the potential of every CYO member, and build the batch’s dynamics and enhance their leadership skills.

“Their performance will also affect how the top 14, which consists of city youth mayor, city youth vice mayor, and 12 city youth councilors will be chosen,” said the city government.

Councilor Lord Arnel Ruanto from Infanta, Quezon, serving as one of the speakers during the event, shared his personal learnings and experiences he acquired from then Naga City Mayor Jesse M. Robredo.

The CYO will be taking their oath of office and will assume respective post on Monday, April 16, 2018, said the city.