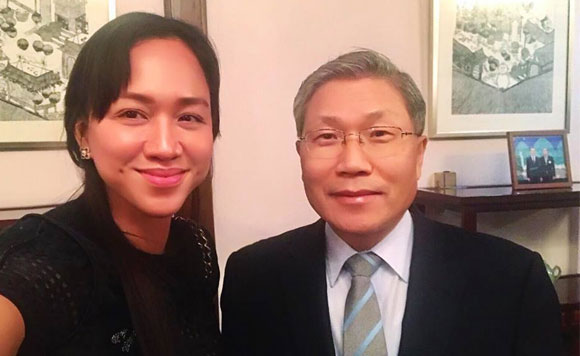 Is there anything sweeter to a politiko’s ears than being considered fit for higher office?

Never mind her slightly disheveled hair, nothing can stop Masbate Vice Gov. Kaye Revil from sharing her selfie with Korean Ambassador Dong-Man Han after he told her thrice that she was fit to be a Senator of the Philippines.

Revil posted about her meeting with the Ambassador on Facebook, and shared her delight over being told that she was an amazing young leader who could be a good senator.

Of course, she wouldn’t say no to such an opportunity, but she said it would be hard to aspire for that post under the current system.

But there is hope, as Senate President Koko Pimentel himself said Revil could get a chance if the country shifts to a federal government and Senators would be elected by region.

This made the Masbate Vice Governor happy since she looks up to Pimentel, but in the meantime, she said she still has a lot to learn.

She better hurry and study, though, because if the present administration’s plans push through, we could have a federal government in place before 2022!

“I don’t like my look in this photo. My hair is so ugly. That’s cause I was running errands that day as beating the halfday workday of offices. But I’m posting this anyway because I treasure what Korean Ambassador H.E. Dong-Man Han told me 3x in the course of our conversation at separate instances & he goes- “You’re an amazing young leader, you can be a very good Senator of the Republic of the Philippines.” ☺ Wow! Yung totoo, sino naman po ang may ayaw di ba, kaso mahirap po in the current system we have in our country. As Senate President Koko Pimentel who heard him say it said- “Probably if Federalism pushes through and Senators are elected by Region, then VG Kaye can very well represent as Senator of her region.” ☺ Haha, thank you SP! You’re my idol! I think I’ll be ready as soon as I think I’m half as brilliant as you. 🌟 Meanwhile marami pa po akong dapat matutunan. Kagaya po ninyo, pagbubutihin ang kokote at gagawa ng napakamabuti. 😅 Salamat sa PDP-Laban sa lahat ng patnubay, gabay at tunay na malasakit para sa bayan. To my beloved Masbateños, libre ang mangarap, pero pagtrabahuan po natin at pagtulungan. ❤ May God bless us all. Blessed Black Saturday. 🙏🏼,” she posted.

Camarines Sur Rep. Gabriel Bordado Jr. is busy amid the…

Not at home! Camarines Sur Rep. Marissa Andaya checks on…

We can be like Vietnam in handling COVID 19 says Masbate…