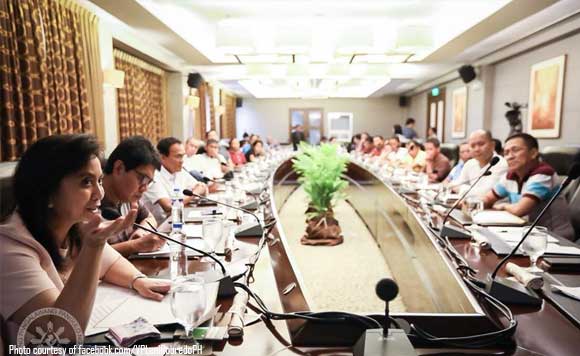 Vice President Leni Robredo has led a meeting with the officials of Naga and Canaman as well as representatives of Public Works department and National Irrigation Administration to find solution on flooding in the area.

Also present were the officials from the
representatives of the Department of Public Works and Highways, National Irrigation Administration, and other local officials for the Naga City and Canaman Flood Control Project.

“We were able to identify that our major waterways are clogged, causing the recent flooding in our area,” she said.

“Given that we share this problem, we aim to address this by working with LGUs of neighboring towns in the 3rd district of Camarines Sur, as well as concerned agencies,” she added.

Robredo also said that she will bring the issue to the national government so that “our collective actions will solve this problem.”

“The Palaro holds many memories for me as a mother, of accompanying my daughters when they were competing. The next few days will surely be action-packed, and I encourage all our young Bicolano athletes to not only give their best in their sport, but to also enjoy the experience, which they will carry with them as they get older,” she said.