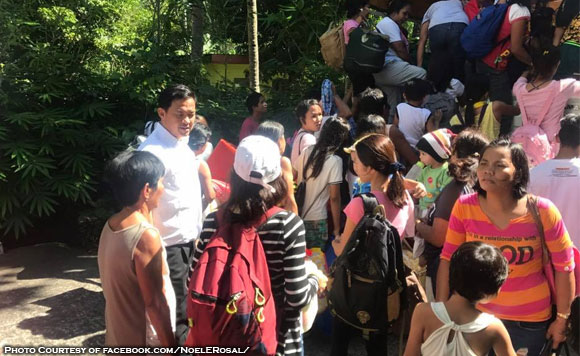 The city mayor here wants Mayon-affected evacuees to follow the Ecological Solid Waste Management Program of the local government to maintain the cleanliness at the temporary shelters and prevent diseases that may be acquired as a result of improper waste disposal.

Mayor Noel Rosal, in an interview on Tuesday told the Philippine News Agency that he directed the City Environment and Natural Resources Office (CENRO) and barangay officials to tell the evacuees to follow the “No Segregation No Collection” policy as one way of maintaining cleanliness in order to prevent dengue and other communicable diseases.

He also instructed the City Health Office to conduct medical services to all the people in the evacuation centers to make sure they are safe from any illnesses.

Rosal earlier ordered the forced evacuation of 3,662 families or 13,505 people in Legazpi, all residents of the 8 to 9-kilometer extended danger zone (EDZ) in the northern portion of the city due to the continuous eruption of Mount Mayon that has spewed a huge volume of ash and heavy rocks.

The five barangays covered by the 8-km danger zone are Padang, Bonga, Mabinit, Matang and Buyoan while the villages covered by the 9-km EDZ are Dita, Pawa, Bagong Abre, Bigaa and a portion of Padang.

The evacuees from Barangay Padang with a total number of 213 families or 799 individuals are now occupying the Buraguis Elementary School Evacuation Building.

The evacuees from Matanag numbering a total of 532 families or 2,052 people are staying at the Albay Central School.

The 424 families equivalent to 1,544 individuals from Barangay Mabinit are occupying the Bitano Elementary School and the Legazpi City High School as their evacuation centers.

On the other hand, the evacuees from the village of Buyoan with a total of 1,092 families equivalent to 3,878 people are staying at the Bagumbayan Central School.

The 958 families or 3,774 individuals from Barangay Bonga are occupying the Gogon High School evacuation center.

The evacuees from Barangay Dita numbering a total of 47 families or 176 people are staying at the Dita Elementary School as their evacuation center.

The 216 families or 737 people from Barangay Bagong Abre are occupying the Oro Site High School.

Meanwhile, the evacuees from Barangay Pawa numbering 145 families or 407 individuals are staying at the Cabangan Elementary School as their evacuation center. (PNA)