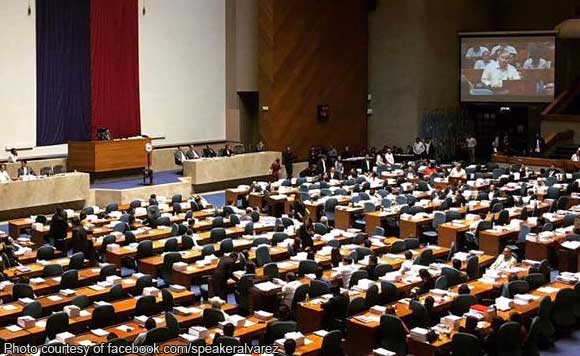 The entire officialdom of Palawan has showed full force as they visited the House of Representatives to gather support for the proposal to divide the Palawan island into three provinces.

The Palawan delegate, led Governor Jose Ch. Alvarez, trooped down to the Batasang Pambansa to meet with Speaker Pantaleon Alvarez “to drum up support on the proposal to divide Palawan into three provinces.”

“The next stop of the tour is the Philippine Senate where the contingent is warmly welcomed by the revered senators,” the province said.

The delegation was also composed of Vice Governor Victorino Dennis M. Socrates and all the members of the 42nd Sangguniang Panlalawigan.

“The recent initiative of the provincial government is seen as a ‘preparation’ for the shift towards federalism of the Philippine government. When federalism eventually sets in, Palawan wants to become a separate state,” said the province.

“This could only be made possible when the province is divided into three provinces to constitute a federal state under the envisioned federal form of government front-lined and campaigned for by no less than President Rodrigo Duterte himself,” it added.

Citing preliminary studies, the province said that the division of Palawan into three provinces is likely to hurdle the criteria set by the law that includes: land area, population and revenue or income.

The mainland Palawan contains 11 municipalities and one city while the remaining twelve are island townships.

“On this premise, the division of the province will pave the way for more efficient governance and better mode of public-service delivery,” the province said.

Palawan said that the bill dividing the province is currently in the works spearheaded by the three congressional representatives of the province.

“Based on the result of the initial discussions, the House leadership will back the proposal once it is calendared for deliberation in the House. The same support is echoed by the senators when the provincial officials met with them,” the province said.

The provincial leadership said that they are “optimistic” that the proposal will hurdle the House of Representatives and the Senate.