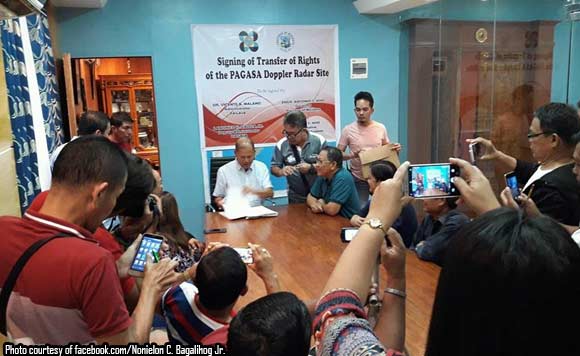 Masbate Governor Antonio Kho has recently signed an agreement with the Philippine Atmospheric, Geophysical Astronomical Services Administration (Pagasa) for the construction of a doppler radar site.

“This historic event is considered a milestone that will impact the lives not only the Masbatenos but including those neighboring provinces and cities within the 700 kilometer radius as covered by such doppler radar systems,” Governor Kho’s office said.

Under the deal, the Pagasa will build an eight-storey building in the tip of the Kalasangan hills, Cataingan, Masbate.

The droppler radar is expected to be fully operational “18 months from now.”

According to the governor’s office, the technology will benefit a lot of people as it can create a huge difference in weather forecasting.

“The technology is capable of forecasting volume of rainshower that will hit the province of Masbate and the track/direction of every typhoon which may affect our province,” the office of the governor said.

The governor said that to bring more tourists in the province, he will construct a view deck of the peninsula.

“As a potential tourist destination apart from promoting public safety, the Governor added that he will establish a viewing deck of the peninsula to boost local tourism and improve the quality of lives of the Masbatenos,” his office said.